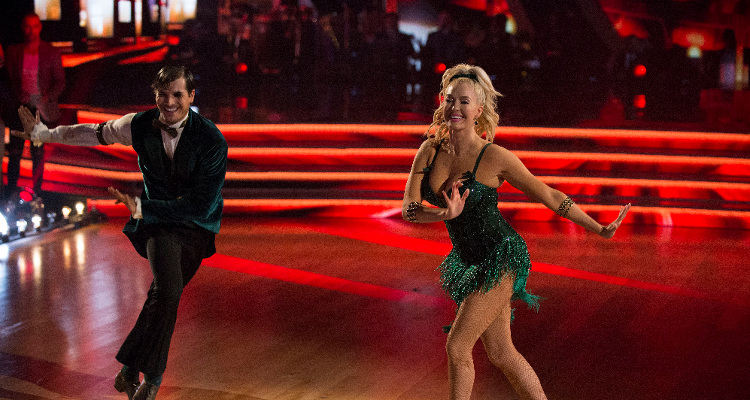 Real Housewives and DWTS fans unite! Erika Jayne is lighting up the ballroom with Gleb Savchenko and people are beginning to notice! Here’s a look at Erika Jayne’s Dancing with the Stars journey, so far.

When the Dancing with the Stars cast was announced, Real Housewives fans were ecstatic about one of the celebs. Erika Jayne is a dance club music extraordinaire with chart-topping tracks. So, it’s no surprise that her performance skills could give even Normani Kordei and the girls of Fifth Harmony a run for their money! What do Erika and her partner, Gleb Savchenko have in store for the eagerly anticipated “Most Memorable Year of My Life” theme on DWTS? We’ll see tonight!

No One Can Intimidate Erika Jayne

The pop diva went from music star to reality star. Her music videos show she’s got the moves, but she’s never tried her hand at ballroom training. So, would she be worried about competitors like Beyoncé’s former backup dancer, an Olympic gymnast, and a figure skater? Jayne would rather not think that way.

“I want to be where I am today, so I’m going to go out there as a very proud 45-year-old woman and kill it. Let the chips fall where they may,” she said about her 20-something rivals. “At the end of the day, I feel great about who I am, where I am in my life, and I’m quite certain that a lot of women in America will feel the same way. You cannot compare apples to oranges. As a performer, you’ll never get past week one if you feel like you’re already defeated.”

A Grand Entrance and Then Some!

Dancing the salsa to her own track, “XXPEN$IVE,” Erika made the glitzy ballroom shine even brighter. Wearing a dress she described as “super short and sassy,” she began the routine by riding a unicorn and walking on sparkling silver steps. And the award for Best Ballroom Entrance goes to: Erika and Gleb!

We’ve seen her entertaining abilities on The Real Housewives of Beverly Hills, but she took it up a notch on Dancing with the Stars with her high kicks and twirls. While fans enjoyed it, some couldn’t help bring out the technical police.

Judge Len Goodman was not too pleased with Erika and Gleb’s pomp and circumstance. He critiqued, “I know the salsa’s a sort of a sexy dance. For me, it was a little bit too raunchy, but I am what I am.” But Julianne Hough was excited to see her send a positive message to women. While both Bruno Tonioli and Carrie Ann Inaba loved her performance, they did have a few technical critiques. For her sultry salsa, the judges gave her a 24 out of a possible 40.

Nevertheless, Erika had some major support in the audience. Along with the other screaming divas of RHOBH, her son Tommy Zizzo was also said to be one of the guests in the crowd. Zizzo is Erika’s son with her husband, Thomas Girardi.

Erika Jayne and Gleb Savchenko returned to the ballroom for Week 2, dancing a Foxtrot to “Bad Intentions.” Criticized for their “raunchy” performance the week before, the celeb-pro team struck a balance between sexy and Erika’s true personality.

“I am always going to be fearless, and I’m gonna be bold,” Erika said in a behind-the-scenes clip. “What I’m not gonna do is pull back and become an apologetic version of myself. That’s not going to happen.”

And boy did she deliver! After Week 1’s unicorn entrance, this time she stepped into the ballroom from a sports car with “Pretty Mess” written on the license plate. It had all the components for a sultry performance, but still managed to be elegant. The judges loved the balance of sexy and grace. And she made her point, too saying, “Sensuality and hey, you’ve got to get out of the ticket, you know?”

Real Housewives fans would agree that Erika Jayne knows how to slay a routine. But the ballroom challenge is not an easy one! Nevertheless, she’s rising to the challenge. “I knew it was going to be a challenge … I take a couple of Aleve and I’m pretty good. So far so good,” she said.

Erika and Gleb work hard in rehearsals to get better as a team. But what does Erika’s husband have to say about her steamy performances with another man? “Tom’s been 100 percent supportive, just like he is for Housewives. He does watch the show. No, Tom and I don’t dance together.” Well maybe after all her ballroom training, they just might!

DWTS Week 4 promises some emotional moments with the “Most Memorable Year” theme. What is Erika Jayne’s most memorable year? Find out tonight on Dancing with the Stars season 24 at 8:00 p.m. EST on ABC!