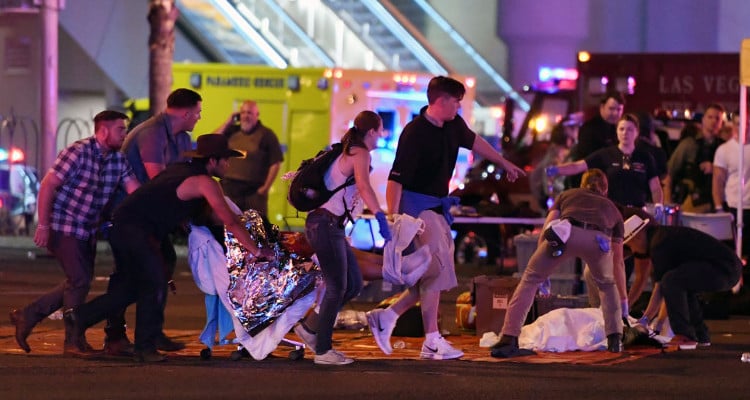 Concertgoers were enjoying themselves on the last night of the Route 91 Harvest country music festival on the Las Vegas strip. But within minutes, bullets from an automatic gun were fired, leaving hundreds injured and at least 50 dead.

Police arrived quickly and took control of the situation. And according to Sherif fJoe Lombardo, the lone gunman, now confirmed to be Stephen Paddock, was killed. Initial reports confirm that over 50 people have died and many more were seriously injured in this ghastly incident.

A horrific attack on innocent people was reported at the Mandalay Bay Casino on the Las Vegas strip by authorities, who reached the area immediately after the mass shooting. It occurred on Sunday, October 1, 2017, the last night of the popular three-day Route 91 Harvest country music festival.

Initially, most people assumed that firecrackers were going off, but soon realized that it was actual gunfire. Panic broke out, and while some stayed down on the ground, others started running away from the direction of the shots.

Concertgoers said that they saw muzzle flashes from the upper floors of the Mandalay Bay Hotel and Casino across the Las Vegas Boulevard. They described the sounds as automatic gunfire coming from the direction of the hotel. Who is the Las Vegas shooter? We will tell you what we know about this tragedy.

A 36-year-old music fan, Kodiak Yazzie, said that he took cover and saw flashes of light coming from the Mandalay Bay Hotel tower high above. The Las Vegas police department has said that “one suspect is down” and it believes that there are no more active shooters on the Las Vegas strip.

They issued a warning on Twitter which read, “Confirming that one suspect is down. This is an active investigation. Again, please do not head down to the Strip at this time.”

Has the Las Vegas shooter been identified? Sheriff Lombardo has made a statement to the media and said, “There was a shooter on the 32nd floor of the Mandalay Bay. Officers engaged the suspect at that location. He is dead. He has been identified. He is a local resident. I will not release his name at this time … Right now we believe it is sole actor, a lone wolf type actor and we have the place under control.” They have since confirmed that the shooter was 64-year-old Stephen Paddock.

The Sheriff also said that they are searching for a woman who was traveling with Paddock. Her name is Marilou Danley, and she is described as being an Asian female, with a height of 4’11”, weighing 111-lbs. He said that the police were still looking for Danley and are interested in talking to her.

Despite what was believed earlier, the Sheriff said that there was only one shooter and that reports of multiple shooters were false. There are different accounts on social media about what happened on Sunday night, but the most accurate information has come from the Sheriff’s department. While the police continue its investigation into this horrible massacre, people are numb with fear and hoping that their loved ones were not injured.