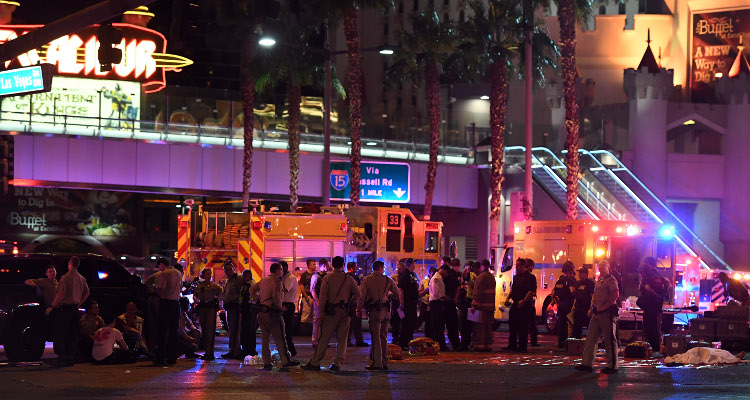 Panic and fear have gripped Las Vegas after a shooting occurred outside the Mandalay Bay Resort and Casino. The last day of a music festival turned deadly for a crowd of innocent concertgoers.

A gunman opened fire on a crowd attending a concert outside the Mandalay Bay Casino at Route 91 music festival on the Las Vegas strip. Hundreds were injured, and at least 50 people are reported dead from the Las Vegas shooting. The gunman is said to be 64-year-old Stephen Paddock from Mesquite, Nevada. What happened in Las Vegas today? Here are the latest updates.

A nightmare came to life for concertgoers at the Route 91 Harvest music festival outside Mandalay Bay Resort and Casino. Harrowing images and videos posted online by witnesses showed Jason Aldean performing before a crowd when the sound of automatic gunfire is heard. The music stopped, and the crowd went into a panic with people shouting “get down” and “stay down” being heard over the screams.

Several SWAT teams were sent to the hotel, where CNN reported that the gunman was firing from the 32nd floor. Official reports reveal that the shooter has been identified. Upon investigating his room after the shooting, they also found several other weapons, including multiple rifles. Also, several eyewitness accounts say they saw muzzle flashes from the higher floors of the hotel where Paddock was shooting from.

Shortly after reports of the shooting broke out, the Las Vegas Metropolitan Police Department reported that “one suspect is down.” It was later reported that  identification of the gunman was confirmed to be Stephen Paddock. Though authorities believe there are no other active shooters, they are looking for Marilou Danley, who is considered a person of interest.

Over 200 people were injured, and at least 50 are reported dead at this time.

Also Read: Who was the Las Vegas Shooter?

Flights in and out of McCarran International Airport in Las Vegas (which is very close to Mandalay Bay) have been canceled after the shooting.

The police are also investigating reports of a shooting at New York-New York Hotel and Casino and Ali Baba Restaurant near Mandalay Bay. However, these reports turned out to be false, and there were no shootings there. However, they’ve requested people to avoid the Las Vegas strip for now.  The latest reports from authorities confirm that the shooter was shot dead in the Mandalay Bay Hotel and Casino. However, details are still unclear as to how he was taken down. “He was shot, but I cannot tell you that it was the police that shot him,” Las Vegas Police Undersheriff Kevin McMahill told CNN. “He may have self-inflicted that gunshot wound. Those details are still emerging throughout our investigation.”

Social media accounts show some people tending to the injured while hospitals are reported to be at capacity. Meanwhile, Jason Aldean who was performing when the shooting occurred, has issued a statement.

“Tonight has been beyond horrific. I still don’t know what to say but wanted to let everyone know that Me and my Crew are safe. My Thoughts and prayers go out to everyone involved tonight. It hurts my heart that this would happen to anyone who was just coming out to enjoy what should have been a fun night.”

More details on the Las Vegas shooting are expected to be known soon.

Tonight has been beyond horrific. I still dont know what to say but wanted to let everyone know that Me and my Crew are safe. My Thoughts and prayers go out to everyone involved tonight. It hurts my heart that this would happen to anyone who was just coming out to enjoy what should have been a fun night. #heartbroken #stopthehate