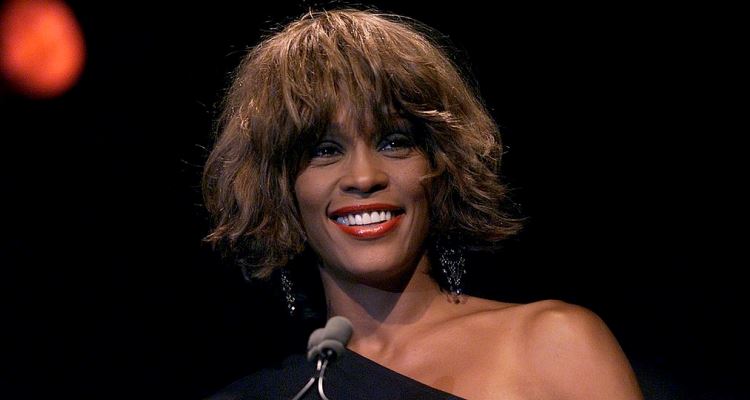 Whitney Houston was born on August 9, 1963, in Newark, New Jersey to Cissy Houston, who was the choir minister at New Hope Baptist Church, where Whitney first fell in love with singing. Her godmother was also Aretha Franklin, so she seemed almost destined to perform. By the time she was 15, she had already performed with her mother and tried to land her own record deal. Although she was a teen model for a time, music was still her true passion and she was determined to make it happen.

In 1985, Houston released her first album, Whitney Houston and she was an instant hit in the entertainment industry. She topped the music charts with hits such as “How Will I Know” and “Saving All My Love for You” (which she won her first Grammy for in 1986) and lasted for 14 consecutive weeks. Her second album, Whitney, was released in 1987 and her hit single “I Wanna Dance With Somebody (Who Loves Me)” went multi-platinum and earned her another Grammy.

Houston not only sang but she acted, as well. Anyone who’s seen the hit 1992 classic, The Bodyguard (co-starring Kevin Costner) will know what we mean! The film’s hit single, a cover of Dolly Parton’s, “I Will Always Love You” was Houston’s biggest hit ever! Many said she sang it better than Parton herself and Houston’s fans couldn’t get enough of both her singing and acting capabilities. It was rumored that at the time of her death she was broke, as Houston’s net worth was reportedly in the negative. However, with large sums of money holding their value with certain assets and estates to her name, it’s unlikely Whitney Houston was ever truly broke.

In the late ’90s, her marriage to singer Bobby Brown got increasingly worse and her drug and alcohol use nearly destroyed her and her career. Concerts were canceled, and at one time, she appeared too thin when she was interviewed by Diane Sawyer. Many thought she was undergoing a nervous breakdown and wondered about the state of her marriage. Their reality TV show, Being Bobby Brown, came at a time when their marriage was falling apart and Houston wasn’t at her best. She was with Brown from 1992-2007 and they shared a daughter, Bobbi Kristina.

When Did Whitney Houston Die?

At 48 years old, Houston was found dead in her bathtub at a Beverly Hilton hotel on February 11, 2012, in Beverly Hills, California. The cause of death was officially ruled as an accidental drowning and the late singer had cocaine in her system. It was reported that the effects of heart disease played a part, as well.

Ex-husband, Brown released a statement saying, “I am deeply saddened at the passing of my ex-wife, Whitney Houston. At this time, we ask for privacy, especially for my daughter, Bobbi-Kristina. I appreciate all of the condolences that have been directed towards my family and I at this most difficult time.”

Houston’s family also released a statement: “We are devastated by the loss of our beloved Whitney. This is an unimaginable tragedy and we will miss her terribly. We appreciate the outpouring of love and support from her fans and friends.”

Bobbi Kristina was born on Mar 4, 1993, and died at the age of 22 on July 26, 2015. She was 14 when her parents divorced and her mother had sole custody of her. When her mother died, Bobbi Kristina was made the sole heir of her estate and it was to be given to her in installments when she turned 21, 25, and then finally 30. She was found in her bathtub with a toxic cocktail mixture in her system and was later put into an induced coma until her death.

“Bobbi Kristina Brown passed away July 26, 2015, surrounded by her family,” the Houstons said in a statement. “She is finally at peace in the arms of God. We want to again thank everyone for their tremendous amount of love and support during these last few months.”

“Krissy was and is an angel. I am completely numb at this time,” Brown told Entertainment Tonight. “My family must find a way to live with her in spirit and honor her memory. Our loss is unimaginable. We thank everyone for the prayers for Krissy and our family as we mourn my baby girl.”

Bobbi Kristina’s boyfriend at the time, Nick Gordon, was suspected of having a part in her death and the judge ruled that he pay the Houston estate $36.0 million. He still hasn’t been criminally charged, but his current girlfriend claimed he abused her and he was arrested on battery charges. Bobbi Kristina was buried next to her mother in New Jersey.