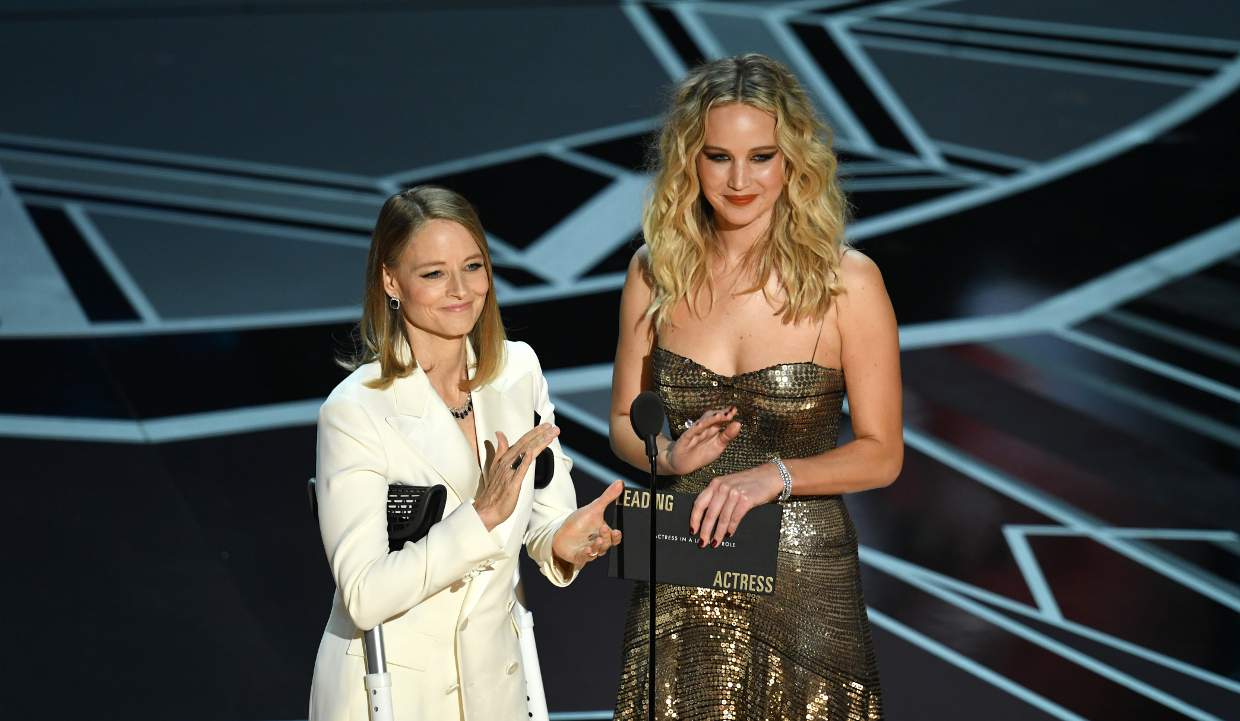 Standing out from the glitter-laden crowd of stars was Jodie Foster, who was dressed down with a very unique accessory! She presented the Best Actress Award with Jennifer Lawrence—but she was on crutches! What happened to Jodie Foster? Keep reading to find out!

If you watched the Oscars 2018 last night, you’d know about the excitement surrounding the Best Actress category we’re talking about. It was the year of the women—the year where all inequality was shunned—and present for the event (come hail or sunshine) was Jodie Foster! But she was sporting an interesting accessory; crutches! Why was Jodie Foster at the Oscars on crutches?

Get the full scoop, right here.

The cool, composed, and possibly heavily sedated Jodie Foster was paired with fireball JLaw to give away the Best Actress Award at the Oscars 2018 last night.

While the latter wore a scaly, dull-gold gown and fierce makeup, Jodie Foster came dressed in a suit with a white blazer and some matching jewelry.

While the whole world waited for someone to ask Foster what happened, JLaw turned to her to do just that.

Foster (witty that she is) pointed her fingers at Meryl Streep, and the whole room rang of laughter. She said, “Streep…She I, Tonya-ed me!,” while making the two-finger “I-got-my-eyes-on-you” gesture towards Streep, who was sitting in the front row.

Lawrence and Foster joked around on stage about how they thought Streep was nice, but it was all “acting.” The audience loved the sarcastic banter surrounding the record Oscar winner.

But all jokes aside, the fans who were really concerned about Foster wondered what could have possibly happened.

The answer is that Jodi Foster had a ski accident! Yup, the dangerous sport tends to claim many victims to injury, and this time, it was the actress.

Also Read: Jodie Foster Movies List: The Top Movies from the “Silence of the Lambs” Actress

Foster, who graced the Oscar ceremony with her slicked hair down and minimal makeup, was already in the eyes of the media for calling out superhero movies and comparing them to the process of fracking.

For those who don’t know what fracking is, it is, “The process involves the high-pressure injection of ‘fracking fluid’ (primarily water, containing sand or other proppants suspended with the aid of thickening agents) into a wellbore to create cracks in the deep-rock formations through which natural gas, petroleum, and brine will flow more freely.”

Foster said that this is what the studios are doing with cinema. They’re making these movies for mass-appeal where “you get the best return right now but you wreck the earth.”

The actress has had a long journey in Hollywood and television after she debuted in Mayberry R.F.D. in 1968.

Since then, Foster, 55, has been a well-known face in the glamour industry. She has also helped many others achieve their own fame.

Jennifer Lawrence acknowledged this very sentiment on stage when she thanked Foster for giving her her first role when she was just 19.

Foster soon became a director, and with successes of Little Man Tate, Nell, and Maverick, she paved another path in the industry for herself.

In the most recent years, Foster even directed some episodes of Netflix’s Orange is the New Black and Black Mirror.

Foster is a three-time Golden Globe winner, has won three BAFTA’s, a SAG Award, and is an Oscar winner in the Best Actress category.

The actress is all set to star as a nurse in the upcoming thriller, Hotel Artemis, and we’re sure she’s going to make us all scream for her again!