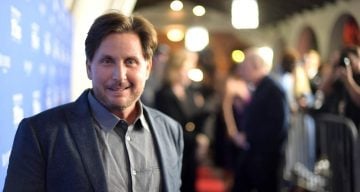 Charlie Sheen is the most famous of veteran actor Martin Sheen’s children, but the most admired is surely Emilio Estevez. He was one of the original actors included in the so-called “Brat Pack” and had a series of hits in the 1980s and 1990s. The actor is now a director who has worked on some of the most well-known TV series of recent times. Estevez’s latest directorial venture, The Public, is getting rave reviews.

According to many, Emilio Estevez was the unofficial leader of the “Brat Pack.” It was a group of young A-list actors who graced the screen in a series of hit films during the 1980s and early 1990s. Estevez acquired fame by acting in a string of hit films, including teen classics like The Breakfast Club and St. Elmo’s Fire.

Emilio Estevez is the “other son” of veteran actor Martin Sheen and the brother of constantly troubled and in-the-news, Charlie Sheen. To carve out his acting career independently of his famous father, Estevez did not take the name “Sheen” and worked hard to make a name of his own.

Keep reading to know what happened to Emilio Estevez.

Falling Off the Radar

After playing the lovable hockey coach Gordon Bombay in The Mighty Ducks franchise, Estevez kind of fell off the map, as far as films were concerned.

Unlike many actors who got a second wind by acting on television (like his brother Charlie Sheen in Two and a Half Men), Estevez eschewed TV completely.

A Few Stabs at Television

Even though Estevez has acted in a few TV shows like Insight and Making the Grade as a guest artist, he did not take up any major assignments on TV. And when he did, it was behind the camera.

Estevez always had writing and directing talent, and TV proved to be the ideal vehicle for it. (Does anyone remember the movie, Wisdom?)

In the mid to late 2000s, Estevez became a director and helmed several episodes of a few well-known TV series. He directed episodes of shows like The Guardian, Cold Case, CSI: NY, Close to Home, Criminal Minds, and Numb3rs.

Estevez also directed feature films such as Rated X, Bobby, and The Way.

Also Read: What Happened to Charlie from “Two and a Half Men?” Where Is Charlie Sheen Now?

Estevez’s latest directorial venture, The Public, has received rave reviews and is currently making its rounds at international films festivals.

The movie follows a bunch of homeless library patrons, who refuse to leave Cincinnati’s downtown public library during a brutal Midwestern cold weather as all emergency shelters are filled to capacity.

A Role Model for His Troubled Brother

These days, Estevez is living a healthy life in order to be a role model for his troubled brother, Charlie Sheen. He believes that it is his duty to support his brother, who seems to be constantly running into health and personal problems.

Recently, Estevez appeared in public and was seen rooting for the real-life Anaheim Ducks hockey team, bringing back happy memories of The Mighty Ducks films. In fact, he’s been very vocal on social media, specifically Twitter, where he sent out a series of tweets in support of the Ducks, even referencing past lines from his famous Mighty Ducks films like “Ducks Fly Together!”

However, that’s about as much as he’s been in the news in recent times. Even fellow “Brat Packer” Molly Ringwald told Australia’s The Morning Show that he’s the only one who doesn’t keep up the others. “The only person who I don’t really see is Emilio Estevez. He really won’t have anything to do with this movie,” said Ringwald, referring to the cast coming together for The Breakfast Club 30th anniversary.

It is indeed rare to see Estevez in public these days, as he has kept a tight lid on his private life in recent years. It’s unclear why he’s distanced himself from the rest of the “Brat Pack” (and the public), but he’s certainly kept busy with other business ventures, which includes a winery in Malibu.

It seems the last we really heard anything publicly from Estevez was when he took to social media to publish an open letter regarding his father’s successful quadruple bypass surgery, in 2015. The letter explained that he was recovering beautifully and asked fans to keep him in their prayers.

Even after all these years of flying under the radar, fans just can’t forget Emilio Estevez, their beloved “Coach Bombay” and Breakfast Club favorite! Here’s hoping we’ll be seeing more of him in the future!