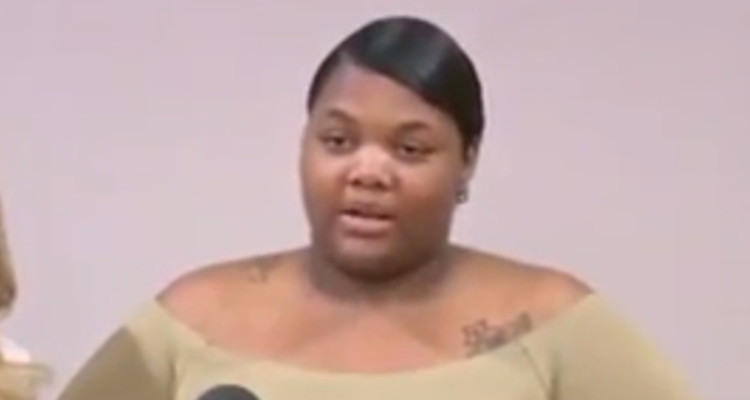 Quantasia Sharpton and her attorney, Lisa Bloom, held a press conference on Monday, August 7, in Manhattan, New York. They spoke in detail about Sharpton’s claim that Usher did not disclose his herpes diagnosis before having sexual intercourse with her. Sharpton is the first woman who filed a lawsuit against the R&B singer, claiming he violated her rights by not disclosing his condition. Sharpton revealed that she tested negative for herpes.

One of the three people who accused Usher of exposing them to herpes through sexual contact has finally gone public with her accusations. The woman in question spoke of her encounter with the singer at a press conference on Monday, August 7, 2017, at the New York Hotel in Manhattan. Quantasia Sharpton, Usher’s accuser, is the first person to come out publicly with the allegation that he exposed her to herpes. Sharpton claimed that Usher did not reveal his diagnosis before engaging in sexual activity with her. Her accusations have made headlines and people are curious to know more about her. Here are some details from our Quantasia Sharpton wiki.

Quantasia Sharpton’s age is now 21, but she was 19 years old when she allegedly met Usher backstage before his concert in 2015. According to her claims, Usher’s security guard approached her and asked for her telephone number saying it was for the R&B singer. Later that night, Usher called her and asked where she was staying. According to Sharpton, “About an hour later, he arrived. We spoke for a while, and then we engaged in sexual contact. He never warned me about any STDs.” She added, “When I first heard he had herpes I couldn’t believe it. I would have never consented if I had known.”

Health is a Top Priority

Sharpton gave birth when she was 19 years old, but tested negative for herpes. She says that she sued Usher because she feels that he should have informed her about his disease before they became sexually intimate. “Although I am negative, I was upset by the reports because would have never consented if I would have known. I would not have taken a risk getting an incurable disease; my health is very important me,” she said.

Usher Herpes Victim Quantasia Sharpton Holds Press Conference with Celeb Lawyer Lisa Bloom Quantasia Sharpton says she was celebrating her 19th birthday at an Usher Concert when she was contacted by Usher’s security. Sharpton says she is negative for herpes nonetheless she still feels violated. #quantasiasharpton#herpes#usher#lisabloom#accused#lawsuit#victim#gracemiguel#marriage#divorce#stds#pain#suffering#battery#civilsuit#condom

Sharpton is being represented by Lisa Bloom, who said that Usher’s actions put her client in danger. She said that her client’s rights were violated by the singer. Bloom and Sharpton are looking at filing the lawsuit in California because the state’s law require a person to disclose if they have a sexually transmitted disease with a partner before intercourse.

Sharpton allegedly goes by Angel Valentino on social media because she says her given name is too “ghetto and hard to pronounce.” Before filing the lawsuit, Sharpton tweeted that she was desperate for money. She also wrote that her life was about to change, which could mean that she had high hopes about the outcome of her press conference. Her accusation against Usher is only the start of a major problem for the singer.

News
Where Is Scott Shellady Going? Does the Cow Guy Have a New Job?
Advertisement