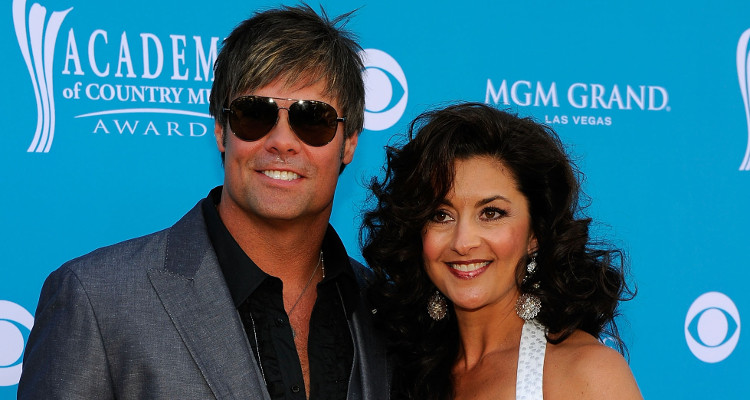 Country music fans are shocked by the sudden death of Troy Gentry, one-half of the duo Montgomery Gentry, on Friday (September 8). Troy Gentry’s wife, Angie Gentry, is grieving the loss of her husband along with a legion of fans.

It’s a sad time for fans of country music duo, Montgomery Gentry. Troy Gentry, who formed the duo with Eddie Montgomery, died after a fatal helicopter crash on Friday. He is survived by his wife and children. Troy Gentry and Angie Gentry’s almost two-decade long marriage was cut short by his untimely death. Here’s what you need to know about Troy Gentry’s widow.

They Married in Hawaii

After a failed marriage, singer Troy Gentry met a woman named Angie McClure. He was previously married to a woman named Kia Bradley Gentry. It’s not known when they separated but they were on good terms and have a daughter together. Kia even shared a picture with Angie on her Facebook page. Not much is known about McClure’s early life, family, age, or how long they were together before they got married.

Angie and Troy tied the knot in 1999 at a ceremony in Maui, Hawaii. That same year, Montgomery Gentry released their debut single “Hillbilly Shoes” and subsequent singles from their first album, Tattoos & Scars, which became Billboard hits. The best wedding present this couple got was a platinum certification for Tattoos & Scars.

The 50-year-old credited Angie for turning him into a better person saying, “I’ve grown up. I’m more responsible now. [Before], the social scene was more important to me. Now, I’d rather be home with my family than out all night.”

Along with Angie, Troy’s two young daughters mourn the loss of their father. We know about his children from the numerous interviews where he spoke about his experiences as a father.

Troy has a daughter, Taylor, from his marriage with Kia Bradley. According to some reports, Taylor is a geography student and works as a promoter and bartender in Louisville. Angie gave birth to Troy’s second child, and their only together, in 2002. They named her Kaylee, a combination of Angie and Troy’s middle names “Kay” and “Lee.”

In older interviews, Kaylee was described as her dad’s biggest fan. Angie was also quick to point out that Kaylee takes after her dad. “She’s more like Troy. She can’t sit still. She’s very social. And she loves to perform.”

The Gentrys went through a difficult time when Angie was diagnosed with breast cancer in 2014. Troy updated his fans on her condition through Facebook and said it was hard to handle. But her cancer was detected early and with chemotherapy and surgery 9she underwent a double mastectomy), she was able to make a full recovery.

Troy saw another loved one fight cancer and survive. His music partner, Eddie Montgomery fought prostate cancer in 2010 and is now clear of it. After Angie was diagnosed, Troy and Angie started the ‘Check Your Headlights’ campaign through which they have helped raise funds for breast cancer awareness.

Angie and Troy were also big supporters of the Make-A-Wish Foundation. “When we meet the parents of these sick children, my heart bleeds for their suffering,” said Angie. “We want to give them some kind of joy and something to look forward to.”

Hey everyone,Troy here. As you know, we launched this “Check Your Headlights” campaign for breast cancer awareness in…

The award-winning musician spent a lot of time on the road, but was always eager to return home. “Angie and I have date nights, of course. But I travel a lot for work, so I find comfort here at home,” Troy once said. They are both outdoorsy people and have always loved to hike, fish, ride horses, and spend time in the woods together.

They would occasionally indulge in ballet, theater, and art exhibits. Some of their family outings were to the Adventure Science Center and Nashville Zoo, which their daughter Kaylee loves.

An official statement was released through Montgomery Gentry’s official Twitter and Instagram pages. Angie Gentry is yet to make a statement on her husband’s death but the official statement reads, “Troy Gentry’s family wishes to acknowledge all of the kind thoughts and prayers, and asks for privacy at this time.”

A public memorial service will be held on Sept. 14 at 11:00 a.m. CT at the Grand Ole Opry House in Nashville and will also be live-streamed online. His family requested donations be made to the TJ Martell Foundation or The American Red Cross for hurricane relief in lieu of flowers.

Our thoughts and prayers go to Angie Gentry and the entire Gentry family.