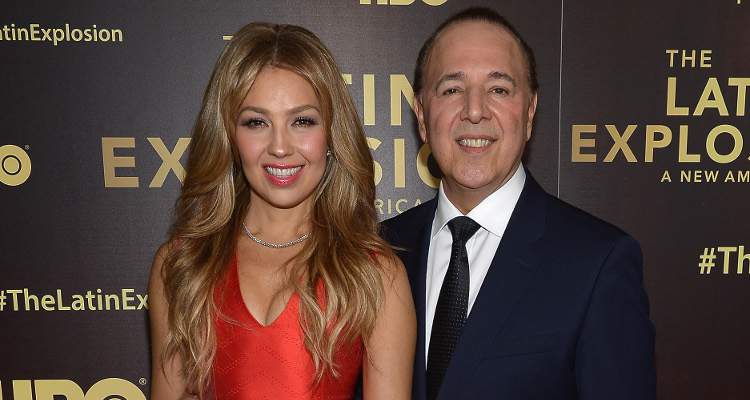 Queen of Latin Pop, or Thalía as she is sometimes referred, has been in a state of bliss for 17 years now with her husband, music and media mogul Tommy Mottola. Though some haven’t always agreed with their relationship, the couple are still very much in love. Learn more about her here.

Known to be one of the most influential stars from the Mexican music industry, Thalia is known for her singing prowess. Being married to a media and music mogul wasn’t easy. As Tommy Mottola’s wife, she was thrust into the limelight and media glare. She has been a very prominent and an important figure of the Latin pop music scene at least 30 years. Know more about her and her contribution to music right here in our Thalía wiki.

Born Ariadna Thalía Sodi Miranda, she is considered to be an icon in her own right. Thalia’s age is 46 as she was born on August 26, 1971. Apart from her music career, she is also associated with acting in telenovelas. She is even referred to as the “Queen of Telenovelas” for her immense body of work, which managed to reach more than 180 countries.

Tommy Mottola and Thalia got married in 2000, after he divorced Mariah Carey. He was with her since 1993 and their union went strong until 1998. Years later, Billboard reported that the media mogul deemed his relationship with Carey “Absolutely wrong and inappropriate.” In an event to launch his book, Hitmaker: The Man and His Music, he said that he was, “truly sorry for any discomfort or pain that all of my good intentions inevitably caused her, and most of all for the scars it left on my two oldest children”

Thalia has two kids with her husband: Sabrina Sakaë, born in October 2007 and Matthew Alejandro, born in June 2011.

It was 2008, while promoting her album, Lunada, she suffered from a very bad case of Lyme disease, which made her very sensitive and even itchy at times. But as they say, nothing happens without a reason and her perception towards life in general had a major shift.  She is known to be a devout believer in God and has been a true and ardent follower of Kabbalah since 2000. Thalía mentioned in her autobiography, “I would sweat profusely, soaking my pajamas, the sheets and even the mattress; everything hurt, even my hair, which, by the way, started to fall out. At times it felt as if my head were going to burst, as if there were lead inside of it; my eyes ached in their sockets….the hypersensitivity of my skin was so severe that sometimes I couldn’t even handle the bed sheets.”

Well, the pair have teamed up with HBO for a documentary series titled 15: A Quinceañera Story, which is about 15 year old girls of Hispanic ethnicity. Mottola is also neck deep into production details of the upcoming Donna Summer Broadway musical next year.

As of now, both of their careers look rosy and we wish the couple many more years of togetherness and marital bliss.