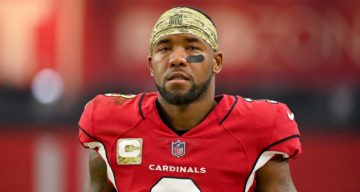 The Cardinals vs. Rams game on January 17 took a concerning turn when Cardinals safety Budda Baker suffered a violent concussion. As the NFL athlete left the stadium in an ambulance, Budda Baker’s girlfriend began to gain the attention of fans on social media. Tiffany Blake Stanfield is a health and wellness expert, a perfect match to the football player who is always recommending nutritional snacks to his fellow athletes. The couple welcomed a new addition to their family recently, and fans have expressed their support to Baker’s girlfriend and children. Find out more about the background of Budda Baker’s girlfriend in this Tiffany Blake Stanfield wiki.

Tiffany Blake Stanfield was born on August 17, 1992. Information about her early life and family is scarce, but she has introduced her mother, Susanne Stanfield, to her social media followers.

Tiffany Stanfield ERYT, CNTP, is a certified yoga trainer and lifestyle/health/nutrition coach. She specializes in scientific holistic health and founded Wholesome Living 365 while based in Indiana.

What started as a personal wellness journey became Stanfield’s professional life. While teaching regular yoga classes, she saw that most of her clients needed to be moved into a pose for effectiveness.

She soon began teaching hands-on assisting classes, which grew in popularity. Her hands-on “Yoga Massage Therapy” set her apart in the field and earned her rave reviews and a long list of clients.

She soon advanced to coaching her clients in clean eating and living. That got her a consulting job as a nutritional coach for police officers in Colorado for 18 months in 2016.

Stanfield moved from Indiana to Newport Beach, California, to Denver, Colorado, again in 2019, and hasn’t looked back since.

Stanfield was previously in a relationship with Aaron Fidler. The Australian native is the CEO and co-founder of the tech company Furrion.

According to her social media posts, they were together at least until 2017. They apparently have an amicable co-parenting relationship.

Stanfield has been dating Budda Baker since February 2020. She made their relationship social media official in July 2020.

Baker is best known for his nutritional expertise within the league. And fans believe his wellness expert girlfriend is behind that.

Stanfield and Fidler are parents to a boy, Asher, born on March 1, 2015. He apparently lives with Stanfield but also spends time with his dad.

Budda Baker and Tiffany Stanfield welcomed their daughter, Alani, in a home birth on December 11, 2021. Baker was ready to skip a game if necessary, but he only had to skip practice because Alani arrived six days after the Arizona Cardinals beat the Chicago Bears.