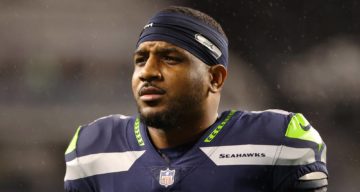 Quandre Diggs suffered concerning injuries during the January 9 game, leaving his future with the Seattle Seahawks in doubt. During this time, Diggs has his teammates and fans cheering for him, but his nearest support remains his family. Quandre Diggs’ girlfriend and baby mama, Abby Evans, has been by his side since he began his NFL career and through the ups and downs. Their relationship is relatively private, but their respective social media channels provide some insight into their family. We reveal more about the background of Quandre Diggs’ partner in this Abby Evans wiki.

Abby Evans was born on October 13, 1995, and hails from Pflugerville, Texas. She is the younger of two daughters born to Tasha and David Keith Evans.

Her father David ran a commercial refrigeration company and was passionate about football, baseball, and basketball. He encouraged and was involved in his daughters’ softball activities during their childhood.

David passed away in 2015 after battling polycystic kidney disease. He is survived by his wife, Tasha Reese Evans; their daughters, Abby and Julie Evans; and extended family.

Abby Evans graduated from Pflugerville High School in 2014 and attended Blinn College in Bryan, Texas, from 2015 to 2016.

Evans is currently based in Seattle. Reports state that she is a professional hairstylist.

Quandre Diggs hails from Angleton, Texas, and played collegiate football with the Texas Longhorns before he was selected by the Detroit Lions in the 2015 NFL Draft. Around that time, he began dating Abby Evans.

It’s unknown when and how Diggs and Evans began to date. They made their relationship social media official on New Year’s Eve 2015.

The couple welcomed their first child together, a daughter named Ariya Marie Diggs, on July 18, 2019 in Texas. Diggs reluctantly left his newborn and baby mama in Texas and reported to the Lions training camp in Detroit, less than a week after Ariya was born. A few months later, the little family moved to Seattle when Diggs was traded to the Seahawks.