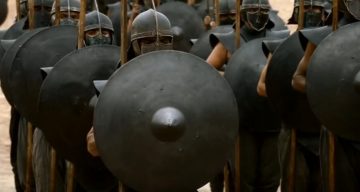 Who knew an Unsullied warrior on Game of Thrones could consummate his love? Well, the unexpected happened on episode 2 of Game of Thrones season 7. If you are wondering if the Unsullied are eunuchs, then feel free to take a look at our Unsullied wiki. Warning, season 7 episode 2 spoilers are ahead!

Finally, the moment that fans of Game of Thrones were waiting for arrived. Commander of the Unsullied, Grey Worm (Jacob Anderson), and Daenerys’ (Emilia Clarke) trusted advisor and Handmaiden, Missandei (Nathalie Emmanuel) proclaimed their love for each other. Not only did they reveal their feelings, they had sex before Grey Worm left to lay siege on Casterly Rock. The intimate scene raised a lot of questions about Daenerys’ army, and has many wondering what ‘Unsullied’ means.

As the show goes on, fans of GoT have a lot of questions. Like, are the Unsullied castrated? People were confused about the Unsullied on Game of Thrones and just what is means to be castrated. Anyone who watched season 7 episode 2 knows that Grey Worm gave the details to Missandei before their intimate moment. Those who have not watched the episode, or still have questions, we have you covered!

Also Read: “Game of Thrones” Spoilers: Was That Nymeria? What Did Arya Say to Nymeria?

The Unsullied are trained Astapor, which is one of the cities of Slaver’s Bay. They are known for their discipline and skill in the battle. They are trained from the age of five to become soldiers. The boys undergo rigorous training that starts early in the morning. They learn to master various weapons including the shortsword, and spear. While training, they also learn how to fight as an army. Since their training is so difficult, only one out of four boys survive. Those who make it are castrated before joining the Unsullied army.

In the series, Grey Worm explains that the masters who train the boys search for their weaknesses. The primary objective is to remove the weakness, emotion, individuality, and self-worth of the Unsullied army men.

Are the Unsullied Eunuchs?

The Unsullied are eunuch slave soldiers who were castrated to remove any sexual urges as well as distractions while in battle. Their only aim is to become victorious and follow orders. They are immune to physical pain, but can still express their anger or resentment, as we have already seen in the show.

It is said that the Unsullied“are fully castrated, with their penis and testicles cut, and their manhoods are burned at the altar of the Lady of Spears. This means that they cannot be as strong as whole men, but this is more than made up for by discipline. They regularly consume an elixir called the wine of courage to deaden their sensitivity to pain. They drink it with every meal, and every year feel less and less pain.”

The Unsullied on Game of Thrones

Missandei and Grey Worm have sex for the first time on the show after he confesses that she is his weakness. The scene raised a lot of questions, considering the fact that Grey Worm was castrated at a very young age. It was never fully revealed whether the Unsullied are completely castrated, but we certainly gained more insight into the matter! Other than Varys, who became a eunuch as a young slave, the only other person in the show whose castration we know the details about is Theon Greyjoy (Alfie Allen) who was emasculated by Ramsay Bolton in season 3.

While we wait for more Game of Thrones season 7, take a look at the trailer for the third episode to take a look of what to expect. Let us know your opinion about GoT season 7 episode 2 in the comments section below.