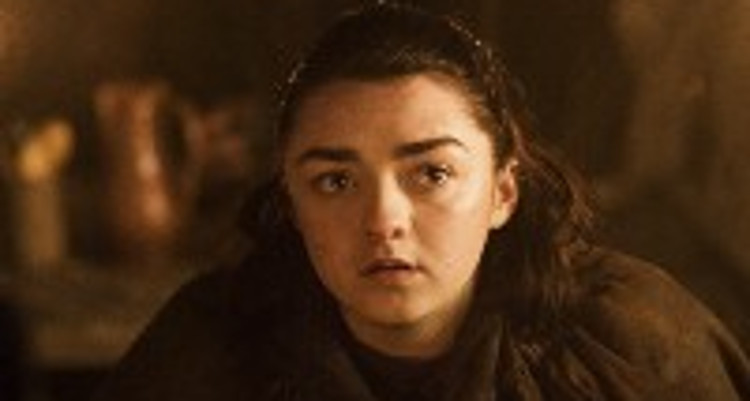 Old friends reunited only to go their separate ways? Game of Thrones season 7, episode 2 showed the reunion of two beloved characters who haven’t seen each other since season 1. We are talking about Nymeria and Arya Stark (Maisie Williams). Was that Nymeria, Arya Stark’s direwolf in the second episode?

We all know Arya never had the chance to say goodbye to her father in season 1 and her mother and oldest brother in season 3. She has tried her level best to reconcile with people she has loved. However, one the most heart-wrenching and soul-crushing moments was when she had to chase away her dire wolf, Nymeria.

But the second episode of season 7 showed a brief rendezvous between Nymeria and Arya. In fact, Arya also said something to Nymeria. So, what did Arya say to Nymeria?

Nymeria on Game of Thrones

There is a possibility that a very sweet and short-lived reunion happened on the show. If you haven’t guessed by now, Arya Stark and her wolf, Nymeria, met each other a few minutes.

We all remember the story behind Nymeria and Arya. Viewers of the show didn’t even get a glimpse of Nymeria until after season 1. If you don’t know the story about Nymeria, then you can read more about it here.

In the first episode of GoT, the Starks discovered the pack of dire wolf cubs and Nymeria was one of them. They adopted the six cubs, and one was given to each of the six Stark children. Arya named her cub Nymeria and was very attached to her.

In the second episode, Arya’s father, Ned Stark (Sean Bean), traveled to the South to serve as King Robert Baratheon’s (Mark Addy) Hand of the King. Ned brought Sansa (Sophie Turner), Arya, and their dire wolves with him. They traveled with the King’s party that included Queen Cersei (Lena Headey) and Prince Joffrey (Jack Gleeson).

One day, Arya was practicing swordplay with sticks against the redheaded son of a butcher, Mycah (Rhodri Hosking). When Joffrey saw both of them, he ordered Mycah to practice against him, but the twist was that Joffrey used his real sword, while Mycah had a mere stick. Joffrey had the sword against Micah’s cheek and drew blood. Upon seeing this, infuriated Arya fought back by hitting Joffrey with her stick. Joffrey tried to hit her back with his sword, but Nymeria pounced to the occasion and bit his arm.

Since Nymeria bit a royal prince and drew blood, Arya knew the Lannisters would kill Nymeria. So, Arya made the painful decision to sent her away by throwing rocks at her so that she would run away.

Nymeria and her pack surrounded Arya in the forest when she was trying to warm herself up by lighting a fire. At first, Nymeria did not recognize Arya, but Arya instantly recognized her cub. But what did Arya say to Nymeria?

Arya called out to Nymeria and asked her to travel North with her, but she understood that her dire wolf had grown up and changed, and was now leading a wolf pack. In the end, Nymeria decided to return to her pack. Arya, who was happy yet heartbroken said, “That’s not you.”

As per sources, her words to Nymeria is a reference to something she told her father in the first season. When Arya’s father told her that she would grow up to be a lady, Arya replied, “That’s not me.”

Whether there will be future encounters is not yet revealed. The short reunion was indeed very emotional. If you did not watch the second episode and want to see the short-lived reunion, then click on the link below.