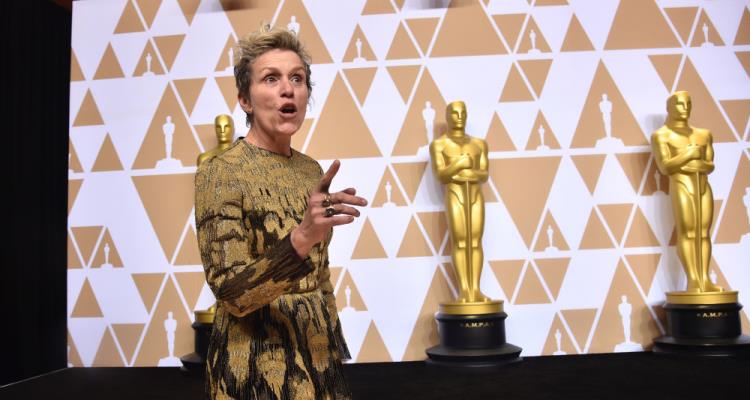 Last Sunday was a big night for Three Billboards star Frances McDormand, but no one saw what happened next. That’s right, Frances McDormand’s Oscar was stolen! But who stole it and why? He goes by the name Terry Bryant and he even filmed himself gloating about his supposed win! Who is he? We have what you need to know with our Terry Bryant wiki.

Who Is Terry Bryant?

Terry Bryant (aka Dj Matari), 47 and single, is from Los Angeles, California and is based in Beverly Hills, according to his Facebook account. According to his Instagram account, he has many job titles, including an entertainment journalist, TV host, producer, and a UN Ambassador. He also listed that he is highly favored by God. He has 333 posts and over 1K followers on his Instagram account. But after last night, it’s hard to take anything he says seriously.

Yes, before his Oscar pillaging days, Bryant reportedly received an award for the United Nations Goodwill Ambassador of Peace. In an Instagram post on February 23, Bryant wrote how honored he was to receive his award.

“Such a great Honor to receive the prestigious honor of becoming a United Nations Goodwill Ambassador of Peace and receive the coveted Honorary World Civilty Award presented by Dr. Clyde Rivers • Dr. Gershom Sikaala and recognized by former Prime Minister of Portugal, António Guterres United Nations Secretary-General. I would like to thank everyone for their encouragement, love and support..(please forgive me if I left out everyone involved)[sic].”

And the Oscar Goes To…

When Oprah Winfrey famously gave out cars to her audience, many joked about her giving away Oscars, too. Sadly, someone took the joke a little too seriously and got on an Oscar of his own—except it wasn’t his!

“After some brief time apart, Frances and her Oscar were happily reunited. They celebrated the reunion with a double cheeseburger from In-N-Out Burger,” McDormand’s publicist, Simon Halls, told The Associated Press.

While at The Governors Ball, the official after party for the 90th Academy Awards, Bryant took a Facebook Live video of himself taking McDormand’s Oscar. He began kissing it, saying “This is mine. My team got this tonight.”

He offered other people to take photos with “his” golden statuette and asked a woman where Jimmy Kimmel was having his after party. The news of the Oscar theft hit social media, when New York Times culture reporter, Cara Buckley tweeted a photo of Bryant holding the Oscar.

Buckley tweeted, “Security at the Governors Ball are looking for this guy, who grabbed Frances McDormand’s Oscar and ran out with it. Wolfgang Puck’s photographer stopped him, got the Oscar back, and the guy disappeared back into the ball. Apparently Frances has said to let him go.”

According to LAPD, Bryant, who had a ticket to the event, was arrested an is being held on $20,000 bail. He is often seen taking pics inside high-profile events, like the Golden Globes, but after his recent felony charge from stealing the coveted golden statuette, it’s possible that his celebrity partying days are over!