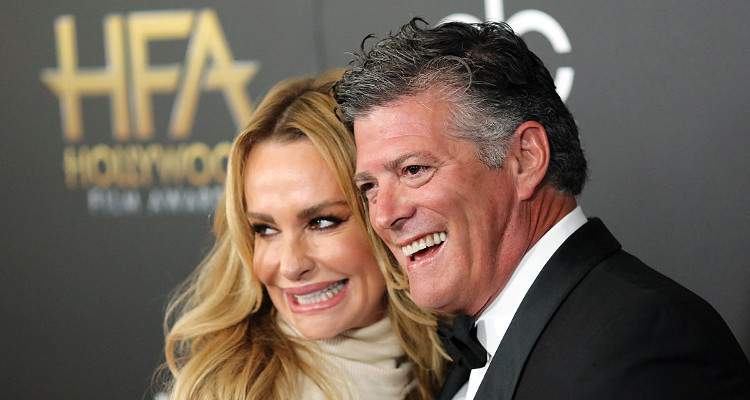 When Taylor Armstrong’s first husband, Russell Armstrong committed suicide, she was a victim of domestic abuse, just file for divorce, and the mother of a little girl. John Bluher was her lawyer, and he got her through this complicated situation. He later married Armstrong and adopted her daughter. With a healthy net worth of $5.0 million and a steady career, Bluher is able to provide for both Armstrong and her child.

Even though she is the more glamorous half of the couple, there is plenty of interest in Taylor Armstrong’s husband, the handsome John Bluher. Armstrong is a reality star, philanthropist, and writer who became famous on The Real Housewives of Beverly Hills in 2010. Back then, she was married to former venture capitalist Russell Armstrong with whom she had a troubled family life, reportedly suffering abuse at her husband’s hands. When the sordid side of their marriage was revealed, Russell committed suicide and was found by his wife and landlord on August 15, 2011. John Bluher came into the picture when he helped Armstrong navigate through the legalities surrounding her late husband’s suicide. Here are a few details from John Bluher’s wiki.

John Bluher’s age is 59, and he met Taylor Armstrong when he helped her with legal troubles that surfaced following Russell Armstrog’s suicide, as she filed for divorce shortly before his tragic death. Bluher and Armstrong then started dating, and it wasn’t long before Cupid struck. A happy Armstrong said, “John loves me for exactly who I am. I just know there will never be enough days with him.” Bluher proposed to her at the St. Regis Punta Mita Resort in Mexico, and the couple exchanged vows in a stylish ceremony at Pacific Palisades, California, on April 4, 2014. They have had no financial worries as John Bluher’s net worth is currently pegged at a healthy $5.0 million.

Happy Birthday to my handsome, loving husband @johnbluher. I love you, cherish you and respect you deeply. Kennedy & I are so blessed.

A post shared by Taylor Armstrong (@officialtaylorarmstrong) on Oct 9, 2015 at 5:31pm PDT

On their wedding day Armstrong said, “Today, John, Kennedy and I became a family. I married my best friend and Kennedy’s family circle became complete.” Kennedy is Armstrong’s daughter from her first marriage, and she lives with her mother and Bluher in his Colorado home. Bluher appeared with Armstrong on the VH1 reality show, Couples Therapy which saw the couple struggle with several issues regarding their lives and relationship.

A Father & a Gentleman

My two favorite people playing. This was a fun day. #love

A post shared by Taylor Armstrong (@officialtaylorarmstrong) on Sep 19, 2013 at 9:43am PDT

On the final episode of Couples Therapy, Bluher swept Armstrong off her feet when he handed her the adoption papers for Kennedy. Speaking through her tears, Armstrong said, “There could be no better father for Kennedy. You make me feel safe and protected, but you don’t make me feel afraid. I cannot wait to be your wife.” Bluher has been a caring and careful father to Kennedy and simply adores her. He came into Armstrong’s life like a knight in shining armor when she needed it the most, and made her life happy and fulfilling.