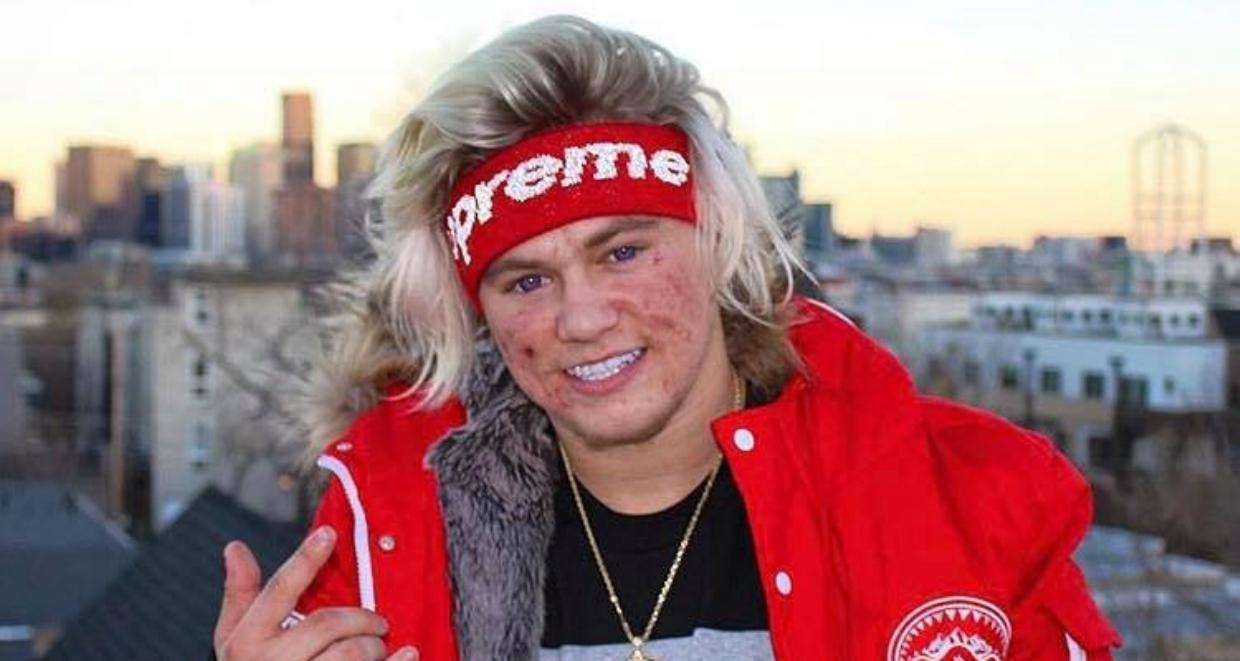 It seems like every week there is a new Instagram or YouTube star gaining the nation’s attention by making videos that are of questionable sanity, at best. These days, Supreme Patty is the latest sensation on the Internet! Even for millennials, he might come across as an extreme experimenter! Supreme Patty’s famous for his Jackass-inspired antics like squeezing lemon juice into his eyes, and of course, smoking anything he finds!

Supreme Patty steals goats, smokes hot sauce, and makes videos that threaten his life and limbs—all in the quest for likes and subscribers! There were even rumors circulating on the Internet that he recently died from “ligma!”

Get the lowdown on his troll disease and journey to success with some details from Supreme Patty’s wiki.

Who Is Supreme Patty?

Patrick Wallace was born on December 18, 1997, which means Supreme Patty’s age is 20. He is an Instagram star from Daytona, Florida, who has amassed 4.5 million followers on the photo-sharing app.

His parents are Angie and Bill Wallace, and Patty also has a sister. His parents divorced when he was three years old.

Supreme Patty maintains a very tight relationship with his sister and mother. He claimed back in October 2017 that he hasn’t spoken to his father in two years.

He also opened up about how his father couldn’t provide a stable home for him and was constantly on the move after the divorce. His father would be with a different girlfriend every time he visited him.

By age 11, Patty began staying mostly with his mom. They moved into an apartment with his grandmother, which is when he started living a somewhat normal life.

Money was tight growing up. Angie would work for minimum wage, day and night at a nursing home, contrary to the rumors of him being a spoiled rich kid.

“All my money is my own money, my parents are like super broke,” he said in an interview online.

As he was going through high school, Supreme Patty was often made fun of due to his acne and questionable teeth. While he started smoking weed early in high school career, it was in his senior year that he almost died.

He got into hard drugs, dropped out of school, and even tried killing himself. The incident led to rehab.

While he still smokes weed today, Supreme Patty cleaned up on other drugs, got his GED, and went to college.

Interesting fact: Supreme Patty wanted to become a cowboy or a bull rider as a kid.

His First Career Choice Was to Become a Rapper

Patty’s stunt career began when he realized that he could eat hot dogs faster than any of his friends while they were all on a camping trip! He was high from all the weed he had smoked, but it probably encouraged him to do what he is most famous for today—smoke the weirdest of ingredients and eat what’s leftover!

“When I was in the 10th grade, I smoked weed for the first time. Weed is fine, but it led me to hang with the wrong crowd, and getting into deeper sh**,” the Instagram star expressed.

He confessed to taking coke, shrooms, acid, Molly, and Xanax, too.

Although Supreme Patty is known for his dangerous antics on social media, he was not a delinquent before. He wanted to become a rapper and uploaded some videos of his music on YouTube.

Patty started his rap career as a teenager under the name, Apollo, looking to make it big! He has recently been promoting his new song, “MAD,” which you can listen to on SoundCloud and his official YouTube channel.

Patty has been working on achieving clear skin since he got his life back on track. He was bullied in school due to his chronic acne problem.

For a while now, he has been following up with appointments for laser treatment surgery for the skin condition. He posted a video three weeks ago of him and Dr. Salar Hazany at his clinic.

Patty’s face has cleared up a lot since the first time he visited the doctor. But it looks like it’ll take a while to achieve smooth, glowing skin.

Although he wants to take care of himself, it seems as though he doesn’t!

Patty was arrested back in October 2017 for allegedly starting a riot, shutting down Los Angeles. A video shows him bring taken in handcuffs while the crowd chanted, “Free Supreme Patty.”

He is also no stranger to the ER. Patty has been taken to the hospital on many occasions, including the time his hand got injured when a ski blade went through it.

But it’s reassuring that this social media sensation with a death wish is all about good skin!

He Attempted Suicide by Jumping off a Bridge

Things went from bad to worse when the 20-year-old tried to kill himself after taking up to six Xanax pills. His depression and his lack of direction in life could all be blamed on the drugs, and they led him to want to end his life.

Fortunately, Patty was saved and put into a detention center for three days for a mental health evaluation, said Michael McCrudden, a Canadian actor and YouTube personality.

Supreme Patty cleaned up fast, as he couldn’t bare the fact that he was hurting his family. So, he took up a job as a lifeguard at the beach in Volusia County and stopped doing drugs altogether.

The Internet is a strange place! Fans of the social media star have been commenting on various platforms that Supreme Patty died of ligma!
People have been frantically searching the Internet for what ligma is exactly. Although it might sound like a disease, it’s a new take on knock-knock jokes.

When someone asks, “What’s ligma?” the response is, “Ligma balls,” which makes ligma just an urban slang for “lick my.”

To get asked the question, trollers have been posting,”RIP Supreme Patty,” on various social media platforms.

So Supreme Patty, being funny and a good sport, took the messages and turned the content around to suit his pun-intended videos!

He posted an Instagram video a couple of days ago where you can see him lying on a clinic bed, stiff, while the doctor takes swabs of his ear wax!

Ligma is no joke @therealdrmiami @millz

Apart from Patty, gaming sensation Tyler “Ninja” Blevins was also a victim of the troll.

Do you love what Patty wears while he does deadly stunts? You can buy jewelry, clothing, accessories, watches, and eyewear like his online!
Recently, there has been an update on his shop—a pop-up in Los Angeles! Supreme Patty’s store is coming up with a pop-up shop in the glamorous City of Angels, so watch out for those dates!

The Instagram star has been offering free watches and free jewelry online, too. His collection of Miami Cuban link necklaces, pullovers, animal dab T-shirts, hoodies, and tops are all grab-worthy pieces!

Don’t forget to shop for his signature shrimp necklace, which is available in different sizes.