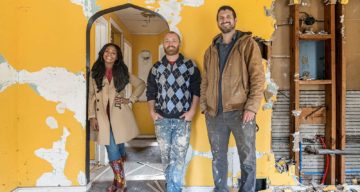 Bargain Block is new on the HGTV scene, and its cast is in the spotlight. The show is set in Detroit, with many historic buildings crying for help. Evan Thomas and Keith Bynum renovate these homes, but the task of finding and later selling them is on Shea Hicks Whitfield. The Detroit born-and-raised realtor knows where to find the best deal for a dilapidated home, which her partners can renew and she can flip. She is no new kid on the Bargain Block, but there’s so much her growing fan base wants to know about her. So, we reveal more on this new reality star in Shea Hicks Whitfield’s wiki.

Shea Hicks was born on August 23, 1977. The Michigan native is one of two daughters born to Audrey Spearman Austin.

Shea Hicks Whitfield is a licensed realtor in Detroit, Michigan. After two years with the Loft Warehouse, she began her current job at PREP Realty in 2018.

Whitfield got into the real estate business when she was looking for a part-time job that would supplement her income. She found a job assisting the real estate sales manager for a company building condominiums, and the job was only a mile from her apartment. With the encouragement of her bosses, she went and got a real estate license.

“When the market crashed, I did real estate part time while I made engines for Chrysler. I did that for many years, and then my husband, as well as a friend who was a real estate agent, said, ‘You realize the market is picking back up, you need to get back out there.’ So I went hard and got back into it,” said Whitfield.

The realtor had first found out about couple and designing duo Keith Bynum and Evan Thomas through social media. She had been following them for a while before HGTV found her in 2020.

HGTV was producing Bargain Block with Thomas and Bynum when they added Whitfield to the cast. She joined the show officially after the pilot episode was filmed, and struck a chemistry with the couple.

The trio’s adventure begins with finding run-down homes in Detroit at bargain-basement prices, thanks in part to their enterprising realtor. While Bynum and Thomas give them a makeover, it’s Whitfield’s job to flip the restored spaces at top dollar.

Terry Whitfield is a graduate of Michigan State University. Currently, he is an education program manager at The Skillman Foundation.