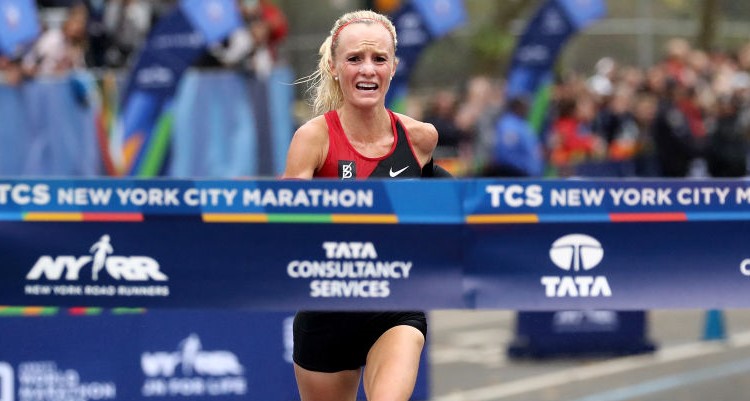 Where is Shalane Flanagan From?

Shalane Flanagan’s age is 36 and she was born on July 8, 1981 in Boston, Massachusetts. Her father is Steve Flanagan and her mother is Cheryl Bridges, a one-time record holder in the marathon. For Shalane Flanagan’s diet and more, you can read her best-selling cookbook titled Run Fast. Eat Slow, which was published in 2016.

Flanagan has no shortages of people who support and love her: Her husband, Steven Edwards and their two teenage foster daughters.

Unfortunately for her, Flanagan wasn’t able to participate in the Boston Marathon due to a stress fracture in her back. She was off for 10 weeks and went on vacation, since she couldn’t run at the time. In that time, she focused on her kids and brainstormed ideas for another cookbook.

If following her tweets aren’t enough, then you can always follow her on Instagram. It will give you the latest pictures on her life and what she’s working on next. Currently, there are a few posts dedicated to her record-breaking win as she crossed the finish line.

While some might still think the idea of slow and steady is only for children, the same may apply to adults. Flanagan’s opponents are all thinking of just going fast but she made patience a priority.

“My coaches told me that it was possible — the training I put in was the best I’ve ever put in,” Flanagan said to The New York Times. “These are the moments we dream of as athletes. This is going to feel good for a really long time.”

It had been 40 years since a woman won the NYC Marathon, a fact that was unacceptable to the Olympic runner.

“I’ve been dreaming of a moment like this since I was a little girl. It means a lot to me, to my family. Hopefully it inspires the next generation of women to just be patient. It took me seven years to do this. A lot of work went into this one moment.”

Flanagan is currently on a press tour on shows such as Good Morning America and Live with Kelly and Ryan, about her historic win.