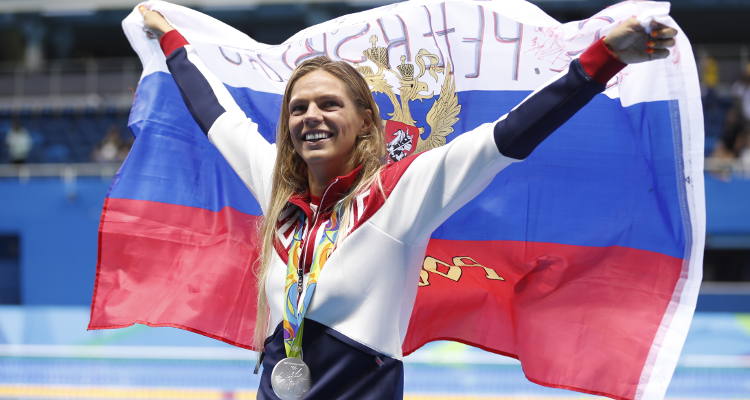 Efimova came under the scanner of officials ever since she failed a drug test in March, and tested positive for meldonium (the same substance that led to tennis star Maria Sharapova’s 2-year ban). The Grozny native won a bronze medal at the 2012 London Olympics in the 200m breaststroke. Yulia previously held the world records in short course 50m and 200m breaststroke, but in 2014 she failed a drug test. She tested positive for DHEA, an endrogenous steroid hormone that is banned in professional sports everywhere. Efimova was subsequently prohibited from competing for over a year, and was stripped of her medals and results. Her world records were also invalidated. Ouch!

Efimova’s participation in the 2016 Rio Summer Olympics was also controversial, as many athletes and officials spoke out against her inclusion in the swimming events. The entire Russian Olympic Team has been dogged by doping allegations in an extensive state-sponsored doping program. After being initially banned from participating due to her doping past, Yulia’s ban was lifted at the last minute by the International Olympic Committee, allowing her to compete at the 2016 Rio Summer Olympics. Efimova silenced critics by earning a silver medal in the women’s 100m breaststroke.

Here are five photos of the swimming star, who was recently tangled up in the doping scandal:

#5 Efimova at the beach in Miami, looking relaxed as she soaks in the sun. She shifted from Russia to the United States in 2011, and currently resides in California.

#4 Yulia looks stunning at the beach in a black bikini, donning a black hat. The 5’10” tall swimmer broke the long course 50m world record, at the Barcelona 2013 FINA World Championships.

#3 Yulia looking radiant in the glow of the sunset, dressed in a green bikini. She has collected many medals at the World and Olympic competitions. She has four golds, five silvers, and three bronzes.

#2 It looks like Yulia loves to spend time at the beach, when she isn’t doing her grueling workouts to train for the Olympics, that is. Here she gazes at the ocean, dressed in a white bikini.

#1 Yulia strikes a pose for the camera during a photoshoot at the beach. She has represented Russia at the 2008 Beijing Olympics, the 2012 London Olympics, and now the 2016 Rio Olympics.

If you want to learn more about the beautiful Russian swim star, click here!