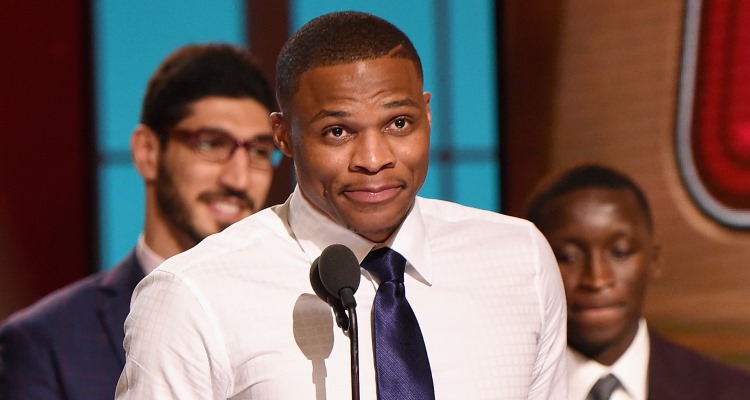 If you missed the inaugural NBA Awards on Monday night, then don’t worry, because we will catch you up on the most important part: The Russell Westbrook MVP moment! From Drake‘s hosting to Taylor Swift’s cameo, the night was one for the books! Now, all eyes are on the Oklahoma City Thunder player, so to learn more about him, have a look at our Russell Westbrook wiki.

Russell Westbrook III was born November 12, 1988 in Long Beach, California and plays point guard for the Oklahoma City Thunder. The 6’3″ basketball player played for the UCLA Bruins in college, before going pro. His parents are Russell Sr. and Shannon Horton and he has a younger brother named Raynard.

Westbrook’s salary is estimated at $26.0 million annually and his net worth is estimated at $45.0 million. And as of Monday, the 28-year-old is the NBA’s newest Most Valuable Player and took the moment to thank his parents for all of his success.

“You guys did any and everything to make sure me and my brother [Raynard] had anything we wanted,” he told the audience. “I told myself I wasn’t going to cry, but I can’t say thank you enough. You guys sacrificed everything. … There’s so many things I could say about you guys for putting me here. I’m just thankful for having you guys in my corner. I love you guys.”

He added: “I remember growing up just being home, playing the video games and stuff with my pops, and my mom sitting there and my brother and just talking about maybe one day I could be the MVP. Obviously I was joking at the time.”

Without a doubt, Russell Westbrook’s family means everything to him and he probably wasn’t the only one fighting the tears during his acceptance speech.

What does Taylor Swift and basketball have in common? Not much really, but Westbrook is a fan of Swift’s work and clearly the feeling is mutual. The Grammy-winning pop-singer made a surprise taped video cameo to congratulate Westbrook on his award!

In truth, Swift was joking and admitted that the two had never actually met, but was happy for him all the same.

“We’ve never met, and that’s a fake story, but I wish it were the truth,” she said. “You are amazing! You’re the MVP. I’m so happy for you. Sending you the biggest hug ever. Congratulations!”

The MVP has been married to Nina since 2015 and as for Russell Westbrook’s kids: They welcomed their son, Noah, on May 16, 2017. They also recently took a vacation to Paris and took a few shots enjoy the many landmarks France has to offer. Fans should also prepare to see plenty of baby pics on the basketball couple’s respective Instagram accounts! They’ve got a brand new bundle of joy!