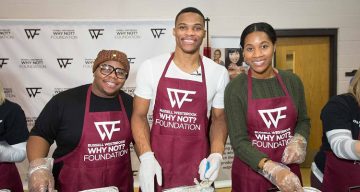 Monday, June 26, 2017 was one of the best and most memorable nights for Russell Westbrook, as he was named the NBA’s Most Valuable Player for the 2016-2017 season. The moment was very emotional for Westbrook as he listed the names of the people who supported him, including his parents and his brother, Raynard Westbrook. Who is Russell Westbrook’s brother? Keep reading for more about Russell Westbrook’s family.

Oklahoma City Thunder star, Russell Westbrook displayed a different side of him on Monday night when he was named the Most Valuable Player for the 2016-2017 NBA season. Westbrook was on the verge of tears while accepting his award as he said, “My parents, man, you guys did any and everything to make sure me and my brother had anything we wanted. I told myself I wasn’t going to cry. I can’t say thank you enough. You guys sacrificed everything in your life … I couldn’t be able to do none of this without you guys. I can’t say thank you enough.”

Not much is known about the basketball player’s younger brother Raynard Westbrook. However, the brothers have always had nothing but support and admiration for one another. The younger Westbrook even attends his brother’s games and cheers him on. You can sometimes even see the pair playing around afterwards. If you are want to know more about Raynard Westbrook and the rest of Russell Westbrook’s family, then keep reading.

Though Raynard Westbrook’s age is not known, we do know that he was born in Los Angeles, California and is the younger and only brother of Russell Westbrook. The siblings were born to Russell Sr. and Shannon Westbrook.

From a young age, Westbrook’s parents encouraged both of their sons to be there for each other. Growing up, the family lived in a Los Angeles neighborhood where drugs, guns, and fights were a common sight. The brothers paid heed to their parents’ advice and always looked out for one another and turned to each other for inspiration, advice, and love.

WOW!!!! Beyond happy for my brother, This is an unbelievable accomplishment and i am so proud to share this moment with you. God has blessed you in so many ways Brodie and receiving your master degree is just the start. I have seen you work extremely hard to achieve your goal and no body can take that from you. LOVE YOU BRODIE!!!! Continue to push the limits bro. #whynot #ripken #OU #boomersooner #masterdegree #communication #thebrodie

When Westbrook was in high school and his grades were slipping, his brother took him to his room and told him, “That’s not what you want to do, if you want to get to the next level like I’m going, you’ve got to do this.” The younger Westbrook paid attention to his brother and turned a new leaf. He started paying more attention to his studies and even made it to the school’s football team. After graduating, Westbrook lived in Edmond, went to college, and even tried to continue playing football.

The Westbrook brothers are inseparable, but when Russell was asked to move to Oklahoma, Raynard was still in high school. Despite the fact that the two wanted to be closer together, Raynard could not move because transferring schools would mean that he could not play football. Instead, whenever Raynard Westbrook had the opportunity, he would fly down to the other side of the country to meet his brother.

Raynard Westbrook attended El Camino College where he played football. During his freshman year, several colleges wanted to recruit him including the University of Central Oklahoma. He did not accept their offer until his sophomore year. As if the brothers did not already have a close bond, Russell Westbrook handed his brother his diploma as he graduated from UCO.