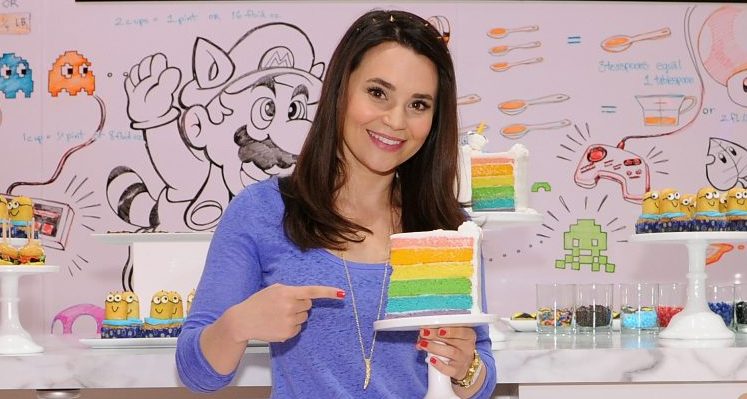 Rosanna Pansino started out as an actress, but the desire to do something different always tugged at her heart. Pansino was inspired by her grandmother to learn cooking and started a baking show for nerds called Nerdy Nummies, quickly becoming a YouTube phenomenon. She later started her own line of popular baking products, which established a solid revenue-generating business for her. Keep reading to know Rosanna Pansino’s net worth in 2017 and how she made her multi-million dollar fortune.

Some time ago, Rosanna Pansino was at a crossroad in her young life. She had to choose between acting and cooking to build a career for herself. Luckily, for all those foodies out there, she chose cooking over acting, and Hollywood’s loss turned out to be the culinary industry’s gain.

Who Is Rosanna Pansino?

Rosanna Pansino is an American baker, actress, writer, and YouTube personality, who is most famous for her cooking show, Nerdy Nummies. Although competition is tough, Nerdy Nummies is considered to be one of the best baking shows on YouTube.

Her Brief Career in Films

Born on June 8, 1985, in Seattle, Washington, Rosanna Pansino’s age is 32. Pansino has Italian, Croatian, German, and Irish ancestry. However, Pansino’s nationality is American.

Initially, Pansino wanted to be an actress and appeared did small roles in TV series like Parks and Recreation and CSI: Crime Scene Investigation.

In 2008, Pansino was a finalist on season 2 of VH1’s Scream Queens, a reality series in which the prize was a role in one of the films of the Saw franchise. She also guest-starred as herself in Bizaardvark, a Disney Channel series in 2016.

Pansino found that she had difficulty in facing the camera, so to get more comfortable in front of it, she started a YouTube channel. But, after achieving some minor success in films and faced with the massive potential of YouTube, Pansino had to make a decision. She could either act in films and TV series or continue her YouTube channel.

Pansino started her YouTube channel after she was encouraged by some of her professional YouTuber friends. She started making YouTube videos regularly so that she could stop being camera shy and slowly gain confidence.

After Pansino filmed the process of making themed treats at a party, she came up with the idea of starting her own YouTube baking show. Soon enough, viewers started appreciating her efforts and wanted to see more of her.

Pansino’s grandmother sparked her interest in cooking, and when she saw the popularity of her baking show, she decided to do it professionally. She thought hard and realized that she had never seen a geeky baking show on television or the Internet, so she decided to create her own and called it Nerdy Nummies.

Since then, Pansino has uploaded more than 310 cake, cookie, and cupcake recipes. And today, her channel has more than nine million subscribers and an average of 75 million views per month.

Each episode of the Nerdy Nummies show is a tutorial that shows you how to make a nerdy-themed baked good. The creations on Nerdy Nummies resemble objects and characters from television shows, video games, books, films, and anime/manga.

Not content with becoming successful on the Internet, Pansino tried her hand at writing as well. She wrote The Nerdy Nummies Cookbook: Sweet Treats for the Geek in All of Us, which was released on November 3, 2015. It contains some recipes from her show, as well as many that had never appeared anywhere previously. The book even featured on The New York Times’ Best Seller list on November 22, 2015, bringing loads of fame to Pansino.

In August 2017, Pansino released her own line of baking supplies. Not surprisingly, it quickly became very successful.

Thanks to her baking supply businesses and the sale of her book, Rosanna Pansino’s net worth in 2017 is estimated at around $10.0 million and growing. Considering that she is just 32 years old, there is no doubt that Pansino’s net worth will rise dramatically in the years to come due to the popularity of her show and products.

Pansino bought a beautiful house in Los Angeles, California, for $4.0 million. Rosanna Pansino’s house is described as a “custom Cape Cod Hamptons estate” and has 5,826 square feet of living space. It sits in a 0.46-acre plot at the very end of a leafy and expensive part of Ventura Boulevard.

The home has sycamore trees lining the entry walkway, a gurgling fountain, a three-car garage, brown hardwood floors, bookcases, and a fireplace. Other features include a sports court, fire pit, barbecue, fireplace, and an outdoor dining room. The house is jointly owned by Rosanna Pansino’s boyfriend, Mike Lamond, and the couple is really happy to be living in such an exquisite house.

In September 2017, Pansino set off on a national tour to promote her line of baking goods. Rosanna Pansino’s tour is being undertaken on a bus that is decorated like a delicious cake on the outside. Inside, it has a modern, state-of-the-art mini-kitchen and six bunks for Pansino and her team, as well as space to hang out in the back.

Pansino has a soft spot for dogs and has also made a video that shows you simple steps on how to make treats for your dogs. You can also gift the tasty treats on occasions like your dog’s birthday.

Pansino has figured out pretty early that the way to make people and dogs happy is through their stomach. And, she is doing a fine job of it!

So, the next time you hear your stomach rumble, you know what to do. Just grab a supply of Rosanna Pansino’s tasty baked goodies and pamper yourself!