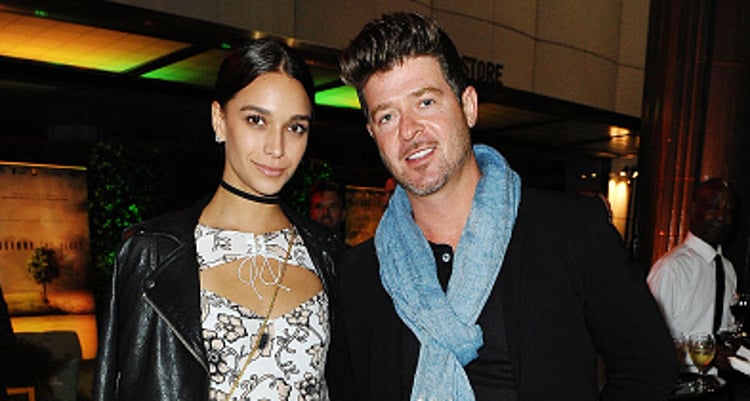 Robin Thicke is ready to welcome a baby with his girlfriend, April Love Geary, and the couple are very excited to start a family. Thicke’s net worth in 2017 is a whopping $15.0 million, which is more than enough to support his children, and future children! how did he become so successful in life and love? Find out everything you need to know about Robin Thicke’s girlfriend, April Geary, his children, his career, and more right here.

April Love Geary posted a sonogram on Instagram with the caption, “Robin and I are very excited to share with you all that we’re having a baby! The due date is March 1st, Alan’s birthday!” We are all excited for the 22-year-old and her boyfriend, Robin Thicke. He is already a father to seven-year-old Julian Fuego Thicke, and we are sure he will be a great father to the new baby as well! Here’s the lowdown on Robin Thicke’s net worth and more.

Robin Thicke was born on March 10, 1977, and is the second son of late actor and TV show host, Alan Thicke and his first wife, Gloria Loring. He has an older brother, Brennan, and a younger half-brother, Carter. The 45-year-old grew up in the film and music industries, and talent clearly runs in his blood. Though he did not take on many acting roles, his talent in music made him the success he is today. His father wrote the theme music for many shows like Diff’rent Strokes and The Facts of Life and also the original Wheel of Fortune tune! So naturally, Robin became interested in music.

Though he dabbled a bit in acting and had small roles on shows like The New Lassie, The Wonder Years, and more, there was a musical calling that led Thicke to explore his talents, with the support of his father. But Alan Thicke, like any father, wanted Robin to get a solid education before entering the entertainment world, which is why he refused to pay for a demo that his son made. At the time, Al Jarreau came to his rescue and paid for the demo. The record reached the hands of Brian McKnight, who was impressed with Thicke and asked him to debut on his album, I Remember You. Thicke sees McKnight as his first mentor and guide.

Thicke entered the industry with aspirations of becoming a singer, but saw himself writing and producing music for other artists. It was a good plan and allowed him to work with big names like Jordan Knight, Christina Aguilera, and Mya, and even gave him the chance to co-write a song for Michael Jackson, but it did not make on the album. All the while, Robin Thicke was planning his debut and was ready to show his talent to the world. He first released “When I Get You Alone,” back in 2002. The single received moderate heat, and was a success —but it was not enough for him to hit mainstream success, just yet.

Forgot how much I love this song & his voice ???????? #music #itunes #nowplaying #robinthicke #thicke #whenigetyoualone #listen

He went on to release albums and singles for the next decade, with hits and misses like “Lost Without You” (2006), and Something Else (2008). But it was in 2013, that Thicke found the success he was looking for. His album Blurred Lines was released and its single of the same name (featuring Pharrell Williams and T.I) spread like wildfire and became the song of the summer! With a newfound global fame to call his own, Robin Thicke was finally a chart buster, and his song topped charts all over the world. And if you don’t remember, his performance with pop star Miley Cyrus at the 2013 MTV VMA Awards broke social media! In what looked like Beetlejuice and a baby giraffe on stage, Thicke performing “Blurred Lines”with Miley was the most tweeted part of the show, with over 360,000 tweets per minute sent globally. (She put the work in twerk!)

All of this success had its downfalls, as Thicke was being sued for copying Marvin Gaye’s 1977 hit song, “Got to Give it Up.” In the lawsuit, Thicke and Williams were to pay for the damages to Gaye’s family in a settlement on $7.3 million, instead of the $25.0 million the family first requested. The troubles did not stop there for Thicke. His wife, Paula Patton, filed for divorce in 2014, which inspired him to release the album, Paula, with lead single “Get Her Back.” Patton and Thicke met as teenagers in 1991. They got married in 2005 and have a son, Julian Fuego Thicke, who was born in 2010. But the singer’s player image did not sit well with Patton, leading her to file for divorce, and fight for the joint custody of their son.

Robin Thicke is expecting his second child, his first with girlfriend April Geary, and could not be happier! With an estimated net worth of $15.00 million, his wallet is pretty “Thicke” with more than enough to support his growing family. He has more than made back the money lost from his lawsuit. Here is a breakdown of Thicke’s net worth: