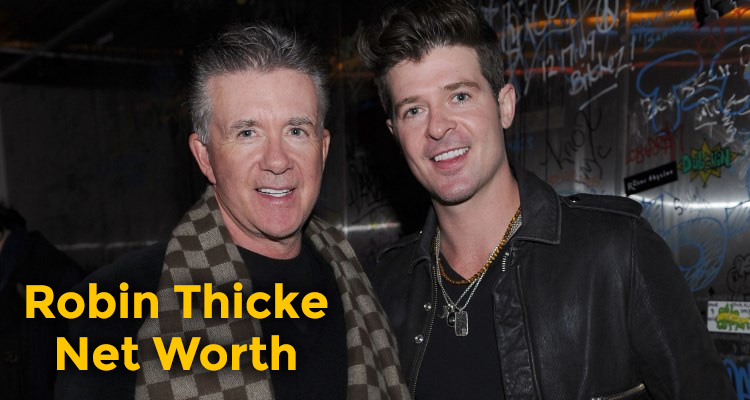 Who is Robin Thicke? When many of us think of Robin Thicke, we mainly think of the guy in the Beetlejuice-striped suit at the MTV Awards grinding up against Miley Cyrus, or as a pop superstar that came out of nowhere to take over the charts. Or maybe you think of him due to his various appearances in the tabloids. What you may not know is that Thicke made his money through time, hard work and perseverance. To learn more about this artist’s story and Robin Thicke’s net worth, keeping reading the story below for a brief Robin Thick wiki.

Music’s in the Genes

Robin Thicke is the second son of the late Alan Thicke (best known as an actor and game show host) and Alan’s first wife, actor Gloria Loring. He has an older brother, Brennan, and a younger half-brother, Carter. What you may not have known is that despite not getting into acting, Robin’s talents don’t fall far from his father’s side of the family tree. Besides acting, Alan had a very good career as a composer of theme songs for various television shows, including Diff’rent Strokes, The Facts of Life and the original theme to Wheel of Fortune. Growing up with such a musical lineage, it’s no wonder that Robin went into songwriting at an early age.

The Beginnings of a Career

Robin’s earliest work can be found on Brian McKnight’s second album, I Remember You when Robin was just sixteen. Shortly after that, Robin would sign his first major record deal with Interscope Records. While Robin was initially signed as an artist in his own right, it was more the work he did with other musicians that started getting him noticed. Robin started racking up the songwriting and producer credits. Robin Thicke’s songs and production skills could be found on releases for artists like Brandy, Color Me Bad, Jordan Knight, Mya, Christina Aguilera and dozens more. But it would be a number of years before he would break out as his own artist.

Robin Thicke would release five albums of varying degrees of success before he released Blurred Lines in 2013. Heralded by the single of the same name, Blurred Lines quickly snatched the top spot on Billboard’s 200 albums chart, as well as the top slot on the Canadian and UK album charts. The album would go on to sell over 731, 000 copies in the United States alone. Unfortunately, sometimes with a success that huge, problems begin to bubble up to the surface both within the music industry and within Robin Thicke wife.

Personal Lives and the Price of Fame

Robin Thicke met actress Paula Patton when he was just fourteen and the two began dating in 1993. The couple eventually got married in 2005. During their time together, both of their careers began to flourish with Robin gaining fame in the world of pop music and Paula gaining roles in films like Hitch, Idlewild and Mission Impossible – Ghost Protocol. Sadly, with the public rise of both of their careers, and especially after the success of Blurred Lines, the tabloids began focusing on Robin, Paula and their relationship. Tabloid accusations of cheating, and the Robin Thick pics of him supposedly butt grabbing at a VMA party made entertainment news headlines.Things got infinitely more complicated when Robin was sued over the very thing that had brought him the most success.

On December 13, famous TV dad and Growing Pains alum, Alan Thicke passed away at the age of 69. The Unusually Thicke actor was playing hockey with his younger son, Carter, 19, when he suffered a fatal heart attack.

Celebrities and fans around the world, gave their condolences to the Canadian TV icon, via social media.

Robin put out a statement to the LA Times on the night of his father’s death on Tuesday. He referred to his father as “the greatest man I ever met” and “always a gentleman.” Confirming that Alan died of a heart attack, the “Blurred Lines” singer, 39, added, “The good thing was that he was beloved and he had closure. I saw him a few days ago and told him how much I loved and respected him.”