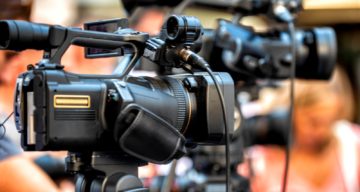 Robin Baumgarten is a Chicago native and the Windy City’s favorite morning anchor. And her personal life is not free of social media curiosity either. The WGN anchor recently revealed she is in a relationship and is engaged to her mystery partner. Her followers want to know who Robin Baumgarten’s boyfriend-turned-fiancé is. However, she is keeping his identity under wraps. We reveal more about her background and family in this Robin Baumgarten wiki.

Robin Baumgarten was born on November 7, 1968, and is a native of Chicago, Illinois. The southside resident is one of two daughters born to Dolores and Gary Baumgarten.

Robin has one sister, Becky Baumgarten Weslow. Becky and her parents are constantly featured in Robin’s social media posts.

Among them, Robin mentions their grandmother. Bernice Baumgarten is well over a hundred years old! Bernice lived through the Spanish flu epidemic and celebrated her 103rd birthday in 2020 amid the COVID-19 pandemic.

Robin Baumgarten attended the University of Illinois Urbana-Champaign and played on the Illinois Fighting Illini women’s basketball team. She received her bachelor’s degree in broadcast journalism. Since beginning her professional broadcasting career, she has worked her way up to the anchor desk.

Baumgarten freelanced with ABC Sports and was a traffic reporter for CLTV News. She also covered traffic, sports, and general news for Shadow Broadcast Services in Chi-Town.

In 1996, the journalist joined WGN-TV as an airborne traffic reporter on Morning News. The expansion of the morning broadcast in 2004 brought Baumgarten on as a solo anchor at 5:00 a.m. She went on to cover the later hours of the morning slot and now anchors the 6:00 a.m. to 10:00 a.m. slot.

It’s unclear when Robin and Matt got married and divorced. The veteran journalists are private about their lives outside the studio.

Robin is currently in a relationship with a mystery guy she refers to as Mr. X. She announced her engagement to him on her official social media pages on June 25.

The WGN family has apparently run into Mr. X a few times but remains tight-lipped on Robin’s personal life. The anchor’s followers only hope that Baumgarten will reveal her new beau’s identity soon.