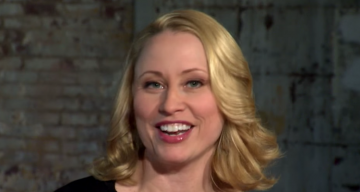 By now, you may have heard that Steve Wilkos was in a pretty terrible looking car accident. It has now been revealed that he was charged with a DUI. This must be a trying time for his family, especially Steve Wilkos’ wife. In this Rachelle Wilkos wiki, we’ll take a look at the talk show host’s wife. From her career to personal life, we’ll cover all the bases. By the time you finish this article, you should know everything about Rachelle Wilkos.

Born Rachelle Lynn Consiglio on January 11, 1971, making her age 47. Much of Rachelle’s early years isn’t public knowledge, but we were able to dig up a few things.

She grew up around St. Claire Shores, Michigan which is about 13 miles northeast of Detroit. There, she attended Lake Shore High School, where she graduated in 1989.

Rachelle’s mom is named Maggie Varney. She is the CEO and founder of Wigs 4 Kids of Michigan, an organization that helps to provide children  who have lost their hair due diseases and treatments with wigs.

Getting a Start in Television

What many people may not realize is that Rachelle Wilkos has had a great career in television. She began that carer by attending Wayne State University where she majored in journalism/radio and TV.

Out of school, Rachelle ended up as an intern for Company, one of the longest-running morning show programs in the United States. She eventually worked her way up from intern to associate producer of the program.

Rachelle then landed on a program that changed her life in multiple ways, The Jerry Springer Show.

Through Springer, Rachelle met security guy Steve Wilkos, a regular fixture of Springer. The two began to date and eventually got married in 2000. Given their relationship, it made perfect sense to come onboard The Steve Wilkos Show as an executive producer.

Outside of TV Land

Rachelle keeps a low social media profile as she has no public Instagram or Twitter. Rachelle and Steve Wilkos have two children, a son and a daughter. The couple makes their home in Fairfield County, Connecticut.

While this car accident and DUI charge have more than likely put pressure on the family, it has also made Steve take a step back and not take his health for granted. He told TMZ:

“Over the course of my life, I have been struggling with bouts of depression and on the day of my accident, I had a complete lapse in judgment which resulted in me drinking and getting behind the wheel of my car. This experience reinforces my commitment to get the professional help that I need and I have recently completed an intensive medically supervised program.”