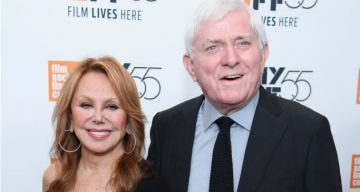 It’s been a long time since The Phil Donahue Show was on the air but the legendary 81-year-old talk show host was honored with an achievement award, and now, fans want to know more. Many are also searching for Phil Donahue’s net worth and information on his wife and kids. For more details, here’s a closer look with our Phil Donahue wiki.

Who is Phil Donahue?

Phillip John Donahue is a former talk show host, writer, and producer. He was born on December 21, 1935, in Cleveland, Ohio and is a graduate of the University of Notre Dame. He is best know for his long-running talk show The Phil Donahue Show, which lasted 29 years and was syndicated all over the country. His net worth is estimated at $23.5 million.

Who is Phil Donahue Married To?

Phil Donahue’s wife is Marlo Thomas and they have been married since 1980. She’s his second wife and they have no children together. Phil Donahue’s children with his first wife, Margaret Cooney, are: Four sons, Michael, Kevin, Daniel and Jim, and daughter Mary Rose. Thomas is an American actress and first met Phil when she was a guest on his show.

She was born Margaret Thomas on November 21, 1937, in Deerfield, Michigan and is best known for her roles in the hit TV shows, That Girl and Free to Be…You and Me. She is one of three children raised in Beverly Hills by entertainer Danny Thomas and his wife, Rosie. In 1959, she graduated from the University of Southern California and started acting a few years later. The award-wining actress is also known for her role as Rachel Green’s (Jennifer Aniston) mother on the hit TV show, Friends. She’s very active in charity work for St. Jude’s Children’s Research Hospital in Memphis, Tennessee. It was founded by her father (with the address named after him) and she also serves as the hospital’s national outreach director.

On Monday, October 16, Donahue was honoured by the Irish American Writers and Artists Inc. with the Eugene O’Neill Lifetime Achievement Award. It was held in New York City and commemorated the award-winning talk show host for his long-running show, which started the idea of including the audience’s questions into the show.

“He has always been the ultimate Irish American voice for truth and justice in media,” said Kathleen Walsh D’Arcy, IAW&A Board Member and Co-Chair of the St. Pat’s For All Parade.

“As our parade Grand Marshal last March, he spoke about human rights, LGBTQ rights, and an Irish history of immigration that shows we should embrace new waves of immigrants from around the world.”

IAW&A also acknowledged his political voice and his activism, which helped make him the honoree of the night.

“Apart from Mr. Donahue’s many artistic triumphs,” said IAW&A President Larry Kirwan, “Irish American Writers and Artists, as a progressive organization, is proud to salute his political activism and his very meaningful and costly protest against the 2003 invasion of Iraq.”

He’s Not a Trump Fan

Where’s Phil Donahue now? With the current political climate, Donahue has mentioned more than once, that he’s not impressed with the current commander in chief.

“I thought he was a hot dog,” Donahue said to The Hill, reflecting on past interviews with the now President Trump. “He collected celebrities and made a lot of noise and got his name on a lot of buildings.”

He compared Trump’s popularity to Elvis and said that popularity is the reason why he won’t get impeached.

“I think it’s too dangerous for a member of Congress to vote for impeachment and upset a significant number of his own constituency,” Donahue explained. “It’s a third rail — he could risk his own re-election.”