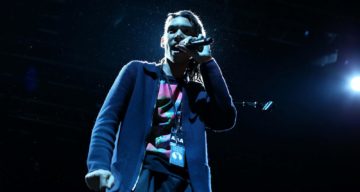 The iconic Grace Jones had everyone a “Slave to the Rhythm” at the peak of the ’80s new wave era. But her personal life intrigued masses even more. Besides her many whirlwind romances, Grace Jones’ son, Paulo Goude, is also the subject of many an Internet user’s attention. Goude inherited his parents’ multiple talents and followed his famous mom’s footsteps. Who is Paulo Goude, and what does he do? We reveal more about Grace Jones’ son here in this Paulo Goude wiki.

Paulo Goude was born on November 12, 1979. He is from New York, but lived in Paris, France, and London, U.K. He has Jamaican, American, and French roots from his parents and is fluent in French as well as Jamaican Patois besides English.

He is the only son of the iconic model and singer Grace Jones. His father, Jean-Paul Goude, had been romantically linked to several models in his career.

The French art director and photographer was first enlisted by Jones in 1977 to consult on her album artwork and music videos. During their relationship, they frequently collaborated and Jones was regarded as Jean-Paul’s muse until their relationship ended.

Jones was a legend during the Studio 54 craze and her son, Paulo, was born at the peak of disco culture. In her memoir, Jones said Debbie Harry and Andy Warhol threw her a baby shower at the Manhattan hotspot Garage.

Jean-Paul went on to marry one Karen Park. Through their marriage, Paulo has half-siblings, Theo and Lorelai.

Jones was briefly married to Atila Altaunbay and had a few other relationships. However, Paulo is her only son.

While living in England, Paulo Goude attended the Cambridge Centre for Sixth-form Studies. He was also raised in France where he attended the International School of Paris from 1987 to 1997.

According to his mother, Goude had been interested in music, learning the piano, and composing music digitally. He also studied audio engineering and production at Alchemea College of Audio Engineering and studied graphic design, too.

Much like his mother, Goude is a model, musician, and actor. Associated with Click Models and Agence Dynamite, he started modeling straight out of high school and walked a lot of runways. He moved to New York to be closer to his mother and was enjoying a thriving career in fashion until 9/11 brought runway shows to a standstill in the immediate aftermath.

When the gigs started to dry up, Goude shifted to music. He is one of the co-founders of the Paris-based band Trybez, which is currently inactive. At its peak, Trybez performed to sold-out venues in Europe and was the opening act on Grace Jones’ tour.

Goude is also a songwriter. He co-wrote “Sunset Sunrise” from his mother’s 2008 album, Hurricane.

Paulo Goude was in a relationship with Trybez bandmate, Azella Amigues. Their relationship status currently is unclear.

Goude and Amigues are parents to a girl, Athena, who was born in 2008. In a 2017 interview, Grace Jones couldn’t resist gushing about her only granddaughter.

“Her name is Athena, she’s eight and she’s so gifted. She plays classical piano without looking at the keys, she’s an amazing dancer and she paints and sings. I love combing her hair. She has the kind of hair where, if you put it in a braid and leave it for two days, it starts dreading like a Rasta, so I comb it with the Tangle Teezer.”