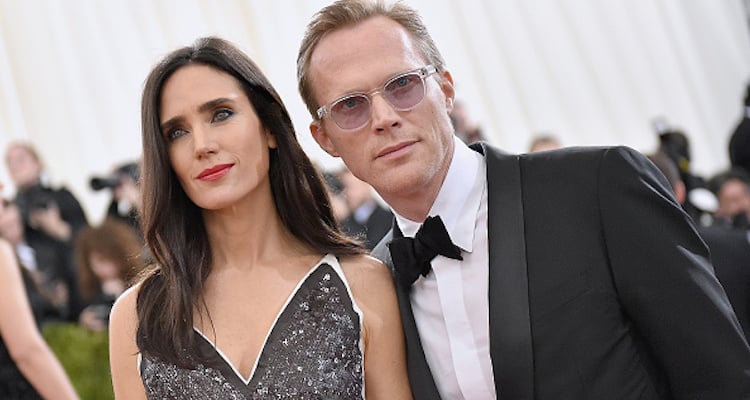 With San Diego Comic Con and D23 wrapped until next year, many are still recovering from the most epic weekend to nerds and geeks everywhere! We can’t blame them, because a lot happened and actors Paul Bettany and Jennifer Connelly have something to do with it. For more details, have a look at our Paul Bettany wiki.

Paul Bettany’s age is 46 and he was born in London on May 27, 1971. His net worth is estimated to be $5.0 million. He came from a theatre family and dropped out of high school to start busking. While he starred in many films, he is best known as the voice of Jarvis in Iron Man and later played Vision in The Avengers: Age of Ultron and Captain America: Civil War.

Who Is Paul Bettany Married To?

Paul Bettany’s wife is actress Jennifer Connelly and they have been married since 2003. They met while co-starring in A Beautiful Mind, nearly 17 years ago.

“I remember meeting him at the first read through,” Connelly, 46, told Entertainment Tonight. “I thought, ‘Hmm, he’s really good that guy.’”

“I’ve never been this close to someone that beautiful before,” he gushed. “I remember thinking, ‘I bet every man you ever met has tried to flirt with you.”

The Hollywood couple have two kids together named Stellan, 11, and Agnes,4; Connelly has a son named Kai, 20, from a previous relationship. She reflected to DuJour magazine on what her kids think of their famous parents, saying, “I think they’re interested in the same way all kids are interested in what their parents do, but it doesn’t come up,” Connelly admitted. “It affords them some fun experiences. They’ve seen hardly any of my movies, but they’ve been on almost every set.”

His Wife Is in Spider-Man: Homecoming

It seems that Bettany and his wife have a lot in common, including voicing Artificial Intelligence characters. In the newest movie of the fast-talking web crawler, Connelly plays the voice of Karen, who helps Peter Parker navigate his new suit created by Tony Stark. It’s similar to how Bettany played the voice of Jarvis for Stark in the Iron Man trilogy and later Avengers.

He Directed Her on A Movie Set

In 2009’s Shelter, Connelly was given no special treatment, even though she and the boss shared a bed.

“It was kind of strange, going to work in the morning with the director,” Connelly said to DuJour in its April 2014 issue. Connelly, who played a homeless woman in her husband’s directorial debut, called the opportunity to work side-by-side with her husband, “an amazing experience to have had together.”

She added: “I had this fantasy that we’d talk about scenes all day,” Connelly confesses. “In reality, if the man sat down, there was a line of people wanting to talk to him.”