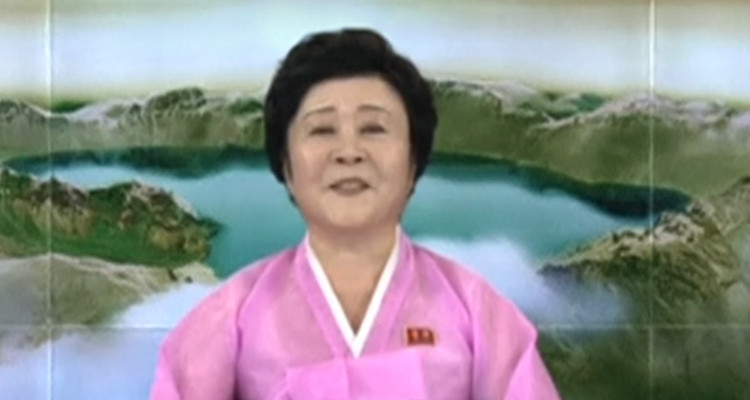 Every time that North Korea conducts a successful nuclear test it gets the announcement done by their favorite newsreader Ri Chun-Hee. The 74-year-old loyalist came out of retirement once again to announce to the world the alleged success of Pyongyang latest nuclear test, an H-bomb detonation. Chun-Hee is melodramatic and emotional when delivering news, and this has made her the darling of the North Korean regime.

The entire world is watching with trepidation as North Korea goes about exploding nuclear devices with nonchalance. This is happening despite many worried countries including the USA warning North Korea not to pursue their nuclear ambitions. So far their supreme leader Kim Jong-un has paid little heed to the threats from other countries that they are willing to take military action to thwart his nuclear ambitions. In all this jingoistic melee one familiar face that has propped up on North Korean TV is newsreader Ri Chun-Hee. People have seen her on Korean Central Television for decades, and she is a celebrity herself for her devotion to the regime in North Korea. So who is Ri Chun-Hee? She is a North Korean newsreader who is making news across the TV viewing world. Here are a few details from Ri Chun-Hee’s wiki.

Born on July 8, 1943, in Tongchon, Gangwon, Japanese Korea, into a poor family, Ri Chun-Hee’s age is 74 years. She was mentored by the North Korean government because she came from a poor family which is considered a sign of trustworthiness in North Korea. Ri studied performance art at the Pyongyang University of Theater and Film and was later recruited by Korean Central Television (KCTV). Chun-Hee made her TV on-screen debut in 1971 and never looked back ever since. She became the chief news presenter of KCTV in 1974 and had a long and fruitful career which went on well till the time she retires in 2012. Her career is admired for its longevity because while others were often demoted and purged, Chun-Hee’s career was never touched by the government.

Back on Television, Again

She has often come out of retirement to announce North Korea’s nuclear achievements like missile launches in February 2016. She is in the news currently because she again came on TV to announce the H-bomb detonation of September 2017; this alarmed all the countries in the world which have been working towards halting North Korea’s nuclear program. Ri Chun-Hee announced North Korea’s hydrogen bomb success in September in her usual melodramatic announcing style. She spoke in a joyous and wavering tone when she was praising the nation’s leaders and with extreme anger when she was denouncing the West.

People believe that Chun-Hee uses her training in drama to make her news reading dramatic and emotional. The North Korean authorities have often praised Chun-Hee for her voice, style, passion and unswerving loyalty to the military regime. She has burst into tears while announcing the death of senior leaders like Kim il-Sung and Kim Jong-il on KCTV. Chun-Hee is mostly seen on TV in her traditional Korean “hanbok” (dress with vibrant colors and simple lines without pockets) or a pink, Western-style suit. With the relationship between North Korea and its neighbors and the West deteriorating by the day, it remains to be seen what step their reclusive leader Kim Jong-un takes. Whatever it may be, there is a good chance that the world will know about it from the passionate and loyal Ri Chun-Hee.