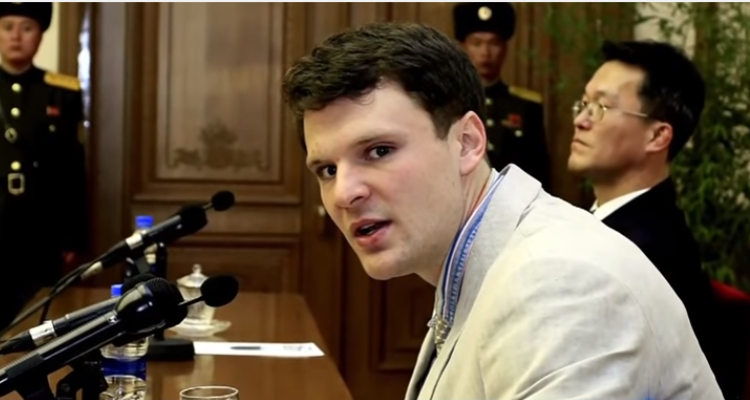 An American college student who was being detained in North Korea for a minor crime has returned home in a coma, and everyone wants to know why. Many at Otto Warmbier’s parents’ press conference have learned that Warmbier has a “severe neurological injury,” and they want to know more about how the young man ended up this way. If you want the details leading up to his coma, then find out with our Otto Warmbier wiki.

Who is Otto Warmbier?

Otto Warmbier, 22, is from Cincinnati, Ohio and was born to Fred and Cindy Warmbier on December 12, 1994. He was also an economics student at the University of Virginia.

Why was Otto Warmbier in North Korea?

While many have been asking, “What happened to Otto Warmbier?” Others want to know why he was in North Korea in the first place. According to his parents via CNN, Warmbier was taking a tour of the country, before he was detrained at the Pyongyang airport in January, 2016 for stealing a political propaganda poster. He was convicted of “hostile acts” against the country and sentenced to 15 years hard labor.

What Did Otto Warmbier Do?

While at the Pyonyang hotel, where Warmbier was staying, the then 21-year-old was allegedly seen by security cameras, taking a political banner from the hotel. He was charged with “hostile acts.” The action was used by North Korean authorities as evidence in Warmbier’s hour-long trial, at which Otto Warmbier’s confession to stealing the poster was given. He was then sentenced in March 2016 to 15 years of hard labor and it was the last time anyone, including his parents saw him, until now. He was seen in tears during his televised trial.

North Korea has released jailed US student Otto Warmbier after over a year in incarceration. The 22-year-old student was sentenced in March 2016 to 15 years of hard labour for attempting to steal a propaganda sign from a hotel. American Secretary of State Rex Tillerson said Warmbier was on his way back to the US to be reunited with his family in Cincinnati, Ohio. #OttoWarmbier #RexTillerson #NorthKorea #Pyongyang #TheGuardianNg

At the Otto Warmbier press conference given by his father, Fred, it was revealed that the Warmbiers don’t believe North Korea’s explanation of how their son ended up in a coma.

“Even if you believe their explanation of botulism and a sleeping pill causing a coma — and we don’t — there is no excuse for any civilized nation to have kept his condition a secret and denied him top-notch medical care for so long,” Fred said.

The Warmbiers are happy to have their son back alive, even though he is unable to respond because of his comatose state. He was welcomed home by loved ones in his home town, but his family blames North Korea for how they treated their son. They didn’t have an update on his condition until just last week.

“Otto has been terrorized and brutalized for 18 months by a pariah regime in North Korea,” the father said in an interview with Tucker Carlson of Fox News, scheduled to air Thursday night.

Warmbier’s father was critical of then-President Obama and his administration’s handling of his son’s release at the time, and U.S. President Donald Trump has been made aware of the family’s situation. Fred said he received “a very nice phone call” from the commander in chief himself. There are still other Americans held in detention in North Korea and a warning was issued earlier for Americans not to travel there at the time of Otto’s detainment.

Warmbier is currently in a stable condition at University of Cincinnati Medical Center, but has a “severe neurological injury,” hospital spokeswoman Kelly Martin said.