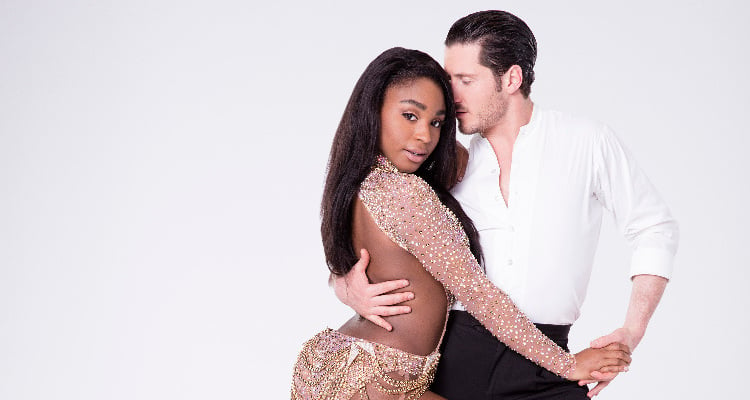 Normani Kordei and Val Chmerkovskiy are a part of the Dancing with the Stars cast for season 24. Normani definitely knows how to lighten things up while practicing for her performance on the Dancing with the Stars premiere. On Wednesday (March 15), Normani took to Instagram to upload a funny and cute video of herself teaching Val Fifth Harmony’s “Work from Home” dance routine. Though Val is a professional dancer, Normani’s “Work from Home” moves were undoubtedly better than his!

Besides Dancing with the Stars, Normani is also busy rehearsing for her upcoming Fifth Harmony Tour! Normani may have a slight advantage on the show, given the fact that she is already an amazing dancer, as is clear from her music videos. So, we think that she won’t have a hard time picking up the moves and killing it on stage!

a pictures worth 1000 words…unless we doodle on it then it's worth even more ????can't wait for Monday #valmani #dwts

About the competition, the Fifth Harmony star said, “It’s more a competition within myself and not with other people.” She further added, “I think, at the end of the day, you have to be happy with who you are and what you present and bring to the table. I know my work ethic is out of this world, so I’m really excited for the journey and just the teamwork and camaraderie between the two of us.” Val and Normani are paired up for Dancing with the Stars season 24, so let us learn some interesting facts about them.

Normani Kordei Hamilton is a Member of Fifth Harmony

Normani Kordei is a part of the girl group, Fifth Harmony, which was formed on the second season of The X Factor. On March 1, 2017, it was revealed that Normani would be one of the contestants competing on Season 24 of Dancing with the Stars. Besides preparing and appearing on Dancing with the Stars, Normani is also busy on a Fifth Harmony tour, which will end on May 27, 2017.

One thing that everybody admires about Normani is her confidence. Even her dance partner, Val noticed it saying, “She’s young, but she has a great sense of self, strength and femininity.” Val further added, “I hope she’s going to bring that strength to the competition.”

Val Chmerkovskiy is from Ukraine

Professional dancer, Val Chmerkovskiy is originally from Ukraine. He is famous for being a professional dancer on Dancing with the Stars and has won the show twice. Additionally, he is also a two-time World Latin Dance Champion and a 14-time U.S. National Latin Dance Champion. Val’s older brother, Maksim Chmerkovskiy, is also a professional dancer on Dancing with the Stars. Val has been partnered with several celebrities like Sherri Shepherd, Zendaya, Danica McKellar, Janel Parrish, Tamar Braxton, Ginger Zee, and now Normani Kordei. He won the competition when he was partnered with Rummer Willis in season 20, and season 23 with Laurie Hernandez as his partner.