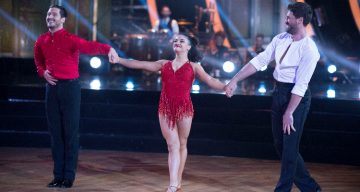 The winner of Dancing With the Stars season 23 was unveiled in last night’s (November 22) season finale. Olympic gymnast Laurie Hernandez, and her pro-dance partner Valentin Chmerkovskiy won the coveted Mirrorball trophy, and were crowned the DWTS season 23 winners.

The Mirrorball trophy will be a part of Herndanez’s collection of medals and trophies for her gymnastics. This is Chmerkovskiy’s second DWTS win after being with the franchise for 11 seasons. His last victory was in season 20 when he was partnered with Rumer Willis.

The 16-year-old Olympic gold medalist, Hernandez, has been the front-runner from the very start of the season. Her natural grace and flexibility proved advantageous for her. But it was her hard work, lively personality, and improvement throughout the 11 weeks of competition that made her the top contender for the win. She has scored a total of five perfect scores, four of which were consecutive from judges Carrie Ann Inaba, Len Goodman, Bruno Tonioli, and Julianne Hough.

James Hinchcliffe showed more improvement than anyone in this season, only behind Hernandez by a point or two each week. Calvin Johnson Jr. proved to be the underdog of the competition, as nobody could have expected him to make it to the final three.

This isn’t the end of Hernandez’s dancing career. On Monday (November 21), it was announced that the gymnast will be joining her partner, Val Chmerkovskiy and the star-studded dancing troupe in this winter’s Dancing With The Stars tour.