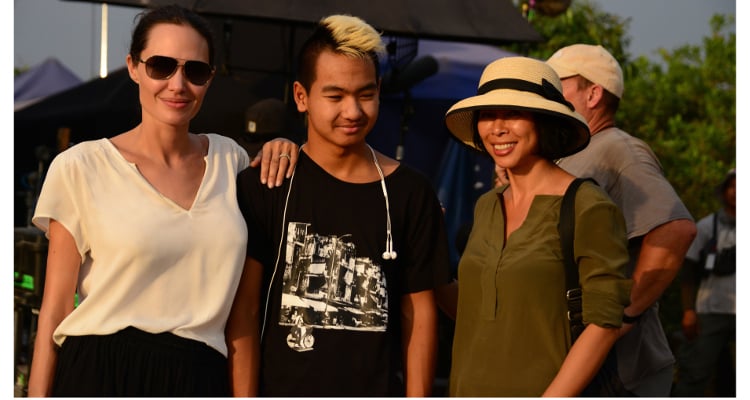 In an interview, 16-year-old Maddox revealed what it was like to work with his mother saying, “[She’s] fun, funny, and easy to work with, she’s a wonder.” He further added, “I was trying to help wherever I could.” When asked about the one thing he loves about Cambodia, his native country, he replied, “The people by far. [They are] calm, relaxed, and when they want to do something wild, they do it — much like me in a way. I’m proud to be a Cambodian.” After watching the First They Killed My Father’s trailer, the main thing people want to know is when the movie’s release date will be.

What Is First They Killed My Father About?

The biographical historical film was directed by Angelina Jolie and Rithy Panh, and written by Jolie and Loung Ung. The movie is based on human rights activist Loung Ung’s memoir of the same name.

First They Killed My Father follows the true story of a family faced with hardships during the Cambodian Civil War. It specifically focuses on Ung’s journey to survive after being separated from her family, and becoming a child soldier.

When she was five, Ung lived with her family in Phnom Penh and the Khmer Rouge army stormed into the city. Her family was initially able to stay together by constantly moving, but Ung’s older siblings were sent to a teenagers camp. Soon after, the army came for her father. Worried that her other kids would be taken away, Ung’s mother had them pretend to be orphans and sent them away for their safety.

Fortunately, Ung and four of her siblings survived and were able to reunite after the war. Ung said that they watched First They Killed My Father and, “They can’t stop watching it. They know that Angie … and all those who made the film made it with love, and also made it to honor the lives of not only those lost, but also the lives of those who survived.”

For those who's been wanting to know where they can see this movie in theaters… Here's a complete list of the only cities and movie theaters that will be showing this movie… I know I posted a longer list yesterday but then realize I had made a mistake by listing all the Landmark theaters. "First They Killed My Father” will open in the following theaters on September 15th. If you're lucky enough to be from one of the few places thats showing below, I suggest you go and bring the whole family to watch it. Because this isnt just a movie…for some of us, its a traumatizing experience fading through time. Even if you didnt experience it first hand but your parents did, the effect of it is wired in you. What had happen is the reason and the cause, and where you're at now and how youve been feeling til this day are the result and effect. Now thats deep! So heres the correct list… Los Angeles – The Landmark New York City – Lincoln Plaza Cinemas, iPic at Fulton Street Theaters Atlanta – Landmark’s Midtown Art Cinema Boston – Landmark’s Kendall Square Cinemas Chicago – Landmark’s Century Centre Dallas – Landmark’s Magnolia Theatre Philadelphia – Landmark’s Ritz Bourse San Francisco – Landmark’s Embarcadero Center Cinema Washington D.C.- Landmark’s E Street Cinema Seattle – Landmark’s Crest Cinema Centre #ftkmf #firsttheykilledmyfather #khmer #cambodia #cambodian #netflix #september15 #intheaters #landmarkstheatre

First They Killed My Father is scheduled to be released on September 15, 2017, on Netflix. The film was made in Cambodia with a Cambodian crew and cast. About the movie, Jolie said, “This is their film, I wanted to bring the tools and make it possible. … It would only be possible if we were allowed to be there, if the people there wanted to participate.”

Angelina Jolie’s eldest son, Maddox, was born in Battambang, Cambodia. The actress adopted him on March 10, 2002, from an orphanage when he was only seven months old. Talking about her son, Jolie said, “He goes back and forth [to Cambodia] a lot, but this would be over four months of just being in the country, really reading, listening, learning and absorbing all things about his culture and country [including] the very, very dark parts.”