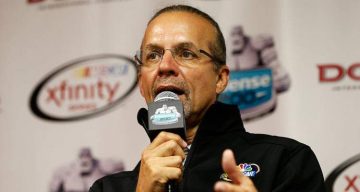 It looks like Khloe Kardashian isn’t the only one with a surprise this Christmas! It was announced on Wednesday that retired NASCAR driver, Kyle Petty, 57, is going to be a father! That’s right—Morgan Petty is pregnant! Here’s everything you need to know about Kyle Petty’s wife with our Morgan Petty wiki.

Who Is Morgan Petty?

Born in 1985 as Morgan Castano, Morgan Petty’s age is 32. Petty is the executive director of her husband’s foundation, Kyle Petty Charity Ride Across America. She married him in December 2015 in a white lace dress.

Kyle Petty, now an NBC sports analyst, is racer royalty, being the son of racer Richard “The King” Petty and grandson of racer Lee Petty.

Kyle Petty was previously married for 33 years, to his ex-wife Pattie Petty, who was diagnosed with Parkinson’s disease in 2011. However, the couple divorced in 2012.

The former racer is already a father to daughter Montgomery, 32, and sons Austin, 35, and Adam, a race driver who died at 19 years old in 2000. He died during a practice run after suffering from a skull fracture.

When you’re in love, time passes too fast. I can’t believe it’s been two years. You make my life complete and you fill my heart. I love you…

It looks like Kyle Petty may need to pass on his parenting tips to his wife, because she is about to be a new mother!

Petty posted a photo of the couple on his Instagram account and wrote,“Christmas came early for me this year! Morgan and I are expecting our first child together in June! I’m so excited I can hardly sleep!”

The post has over 1,900 likes on Instagram, and the congratulatory messages have been ongoing since the news was announced.

One comment read, “Congratulations!! Nothing like finding the love of your life and raising a child with her. I enjoy seeing you smile.”

Another commenter wrote, “That is phenomenal news brother. Strengthening the family legacy!! awesome!! Congratulations to you both!! Now that REALLY means you are gonna have to spend more time Charleston relaxing!!!! [sic]”

Morgan Petty doesn’t appear to be showing much in the picture, but the baby will be due sometime in June 2018. You can always keep an eye on Petty’s pregnancy journey on social media and stay tuned for more details.

Christmas came early for me this year! Morgan and I are expecting our first child together in June! I’m so excited I can hardly sleep! ?: @boonetownstory