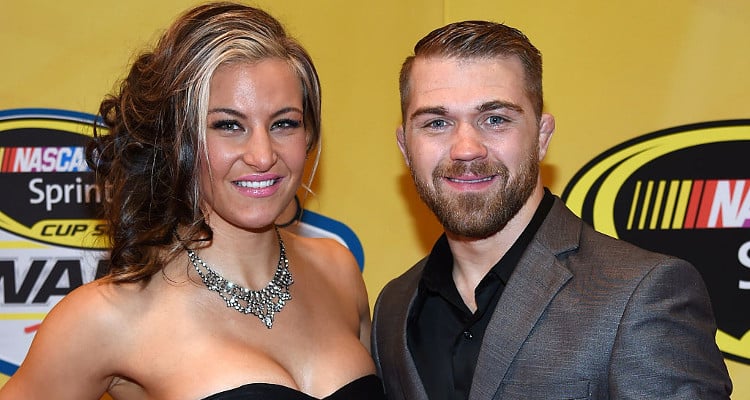 Miesha Tate and Bryan Caraway have been together for quite a long time and were even dubbed ‘MMA’s power couple.’ But since Tate retired, rumors of relationship troubles have been floating.

Former UFC Women’s Bantamweight Champion, Miesha Tate may have retired, but she’s not out of the spotlight just yet. Though, it’s mostly her relationship that makes her a media favorite. Miesha Tate’s boyfriend is also a UFC fighter. Bryan Caraway is considered the MMA bad boy with the number of beefs he has gotten into. Since Tate retired, many are speculating that their relationship is either on the rocks or they have split. Here’s what’s up with the MMA power couple in our Bryan Caraway wiki.

The 32-year-old Caraway is from Goldendale, Washington. He went to North Idaho College for one year before transferring to Central Washington University. In the three and a half years he spent there, he was on the wrestling team until the program was dropped in 2004. One of his teammates was another UFC veteran, Dennis Hallman’s cousin. He introduced Caraway to Hallman who got him hooked to MMA.

He returned to his hometown, where he started fighting professionally. He lost his first match after it was stopped by a doctor on account of a laceration on his face. After losing his initial fights, Caraway bounced back and went on to win six straight. That earned him a contract with Strikeforce. He later fought for EliteXC and World Extreme Cagefighting.

Caraway made his UFC debut in 2011 at The Ultimate Fighter 14 Finale. He almost pulled out of the fight because of an illness but ended up winning against Dustin Neace. His net worth hasn’t been calculated yet, though Miesha Tate’s net worth is around $2.0 million.

Their combined net worth is said to be around $400,000, making it no surprise that they’re considered to be MMA’s power couple!

Feels good to be back in the states! Pumped to take the @harleydavidson out on this beautiful day with the man himself @thomasg1993!! #Harley #StreetGlide #Ride @alpinestars @hjc_helmets @Afflictionclothing

Caraway and Tate were at Central Washington University together and have been dating for years. He admitted that he was surprised by her decision to take up MMA. Caraway, who started the MMA club at the university, was opposed to the idea.

He saw her as a potential girlfriend. So, when she sought him to be her trainer, he felt that would ruin their budding romance. “I was like, ‘Whoa, this is my deal,’” Caraway confessed in an interview adding, “‘You don’t want to get your face punched. You’re a cute little girl.’”

Nevertheless, they managed to forge a relationship —romantic outside the gym and trainer-fighter in the gym. Their relationship was strictly business and Caraway didn’t let his feelings get in the way of Tate’s aspirations. He admitted that he was initially hard on her, hoping she would quit.

They eventually began dating while keeping their trainer-fighter relationship. They brought in another trainer for her to act as a buffer between them. He eventually conceded that she could handle herself in the octagon. “It taught me a lot, not to put limitations on somebody just because you’re uncomfortable with it,” he said.

Most Hated Couple of the Sport

Though their combined achievements and earnings make Miesha Tate and Bryan Caraway a power couple, they have also been called the ‘most hated couple in MMA.’ The title may be harsh, but not without reason. The two can be pretty antagonistic to their other half’s opponents.

While Tate is criticized for giving her boyfriend terrible corner advice, Caraway gets into arguments with his 30-year-old girlfriend’s opponents. He’s been accused of assaulting Cat Zingano just before her fight with Tate. The couple has their own feud with Ronda Rousey, which included a nasty Twitter battle between Caraway and Rousey.

After Tate retired following her loss to Raquel Pennington at UFC 205, Caraway said, “She’s not herself lately,” adding that her heart’s not in it anymore. Her retirement has since fueled rumors that Tate and Caraway’s relationship is on the rocks.

Further adding to the speculation is that she has been spotted traveling solo and there has been a lack of sightings with her boyfriend. But at this point, there’s no evidence to suggest that the MMA couple has broken up. So, take these rumors with a grain of salt!