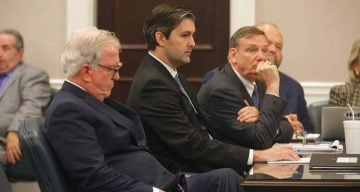 After the events of the Michael Slager and Walter Scott video, it has been confirmed that Slager was found guilty for shooting Scott to death, back in 2015 in South Carolina. For more information on the sentence, have a look at our Michael Slager wiki.

Who is Michael Slager?

Michael T. Slager’s age is 36 and he was born to Karen Sharpe and Thomas J. Slager in Florida in 1981. Michael Slager’s wife is Jamie Slager but they reportedly don’t have any children. At the time of the shooting, Michael Slager was 33 and Walter Scott was 50. He allegedly grabbed Slager’s Taser in his hand and Scott began to run away but was eventually unarmed. He was shot in the back eight times by the now-former police officer.

“I pulled my firearm, and I pulled the trigger,” Mr. Slager recalled later. “I fired until the threat was stopped, like I’m trained to do.”

It has been suggested that the taser was planted on Scott by Slager and everyone initially believed his statement when retelling the incident. At the time of the incident, a video was recorded by Feidin Santana, a barber who was walking to work. But Santana didn’t come forward right away with the key piece of evidence, which completely turned the case around once it was revealed.

Once the video was admitted, Slager was quickly fired and arrested, while the City of North Charleston offered $6.5 million to the Scott family. Slager was on trial for murder but the jury was deadlocked, which resulted in a mistrial.

According to the prosecutors, Slager’s actions warranted a life sentence for violating Scott’s civil rights and wilfully using unnecessary force.

“The defendant plainly intended to at least cause serious bodily harm when he unlawfully and repeatedly shot Scott in the back,” prosecutors wrote in a sentencing memorandum last month. “As the defendant knew at that time from his law enforcement training, he was prohibited from using lethal force in this situation because using lethal force against an unarmed, nondangerous fleeing subject was a gross deviation from reasonable conduct.”

Slager plead guilty to Scott’s murder and was sentenced to 20 years behind bars. In the months after Sott’s death, the community protested for reform to the North Charleston Police Department. The Scott family’s lawyer, L. Chris Stewart said that the judge’s ruling showed accountability.

“Being a police officer is one of the most powerful jobs in the country and you should be respected, but it doesn’t mean you’re above the law,” Stewart said, adding “The death of Walter Scott … can make the next officer think one second longer before pulling that trigger.”

Judy, the victim’s mother, said she forgave Slager for what he did, which caused him to cry in court. The victim’s brother, Anthony, echoed the sentiment.

“I miss my brother, and our family will never be the same,” he said. “Until I got the help I needed, it helped me to release the pain of losing my brother. God gave forgiveness in my heart for Officer Slager.”