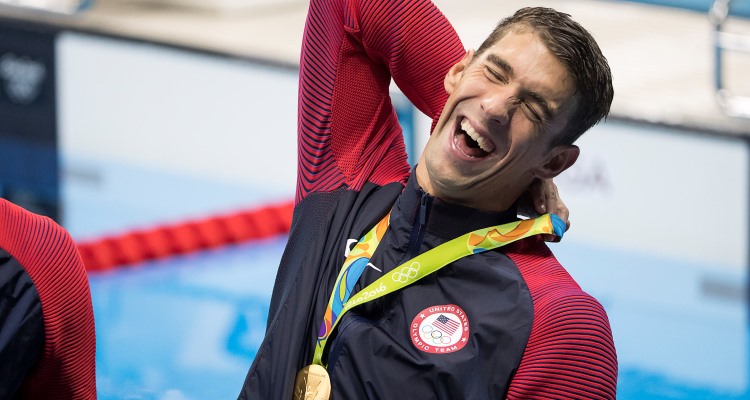 Michael Phelps’ mom, Debbie Phelps, raised the family as a single mother on a teacher’s salary. The Phelps family acted as a team and rallied together, despite having different swimming schedules. Michael’s father, Frank, and Debbie divorced when he was nine-years-old and they have been estranged ever since. The family continues to be a strong unit, who support each other very much. Michael Phelps’ fiancée (soon to be Michael Phelps’ wife) Nicole Johnson, have extended the family by introducing the next generation, Michael Phelps’ son, Boomer Robert Phelps.

Happy 31st Birthday MP! Love you and can't wait for our next adventure. @m_phelps00

Though Michael grew up without a father, he wasn’t in short supply on a father figure. Coach Robert “Bob” Bowman has been in Michael’s life since the beginning, and has trained him to be the best Olympic swimmer in the world. We also have a hunch that Boomer’s middle name is actually named after Bowman. It makes sense, since he’s the closest thing Michael has to a father, and that’s no secret from the family.

Above, we see Debbie wishing her children a happy Mother’s Day and saying how proud she is of her family with a beautiful collage.

Two of my favorite ladies-daughter @hilary_phelps and future daughter in law @nicole.m.johnson-VIP reception at @nbac2016gold. Missing my third favorite lady, my daughter Whitney. Love you!

Here, we see Hilary, Debbie and Johnson at a wedding -and judging by the caption, Debbie is having a great time with her favorite women!

Here we see all the special ladies in Michael’s life wishing him a happy birthday in front of the man himself!

For more stories on Michael Phelps and his family at the 2016 Rio Olympics, click here.