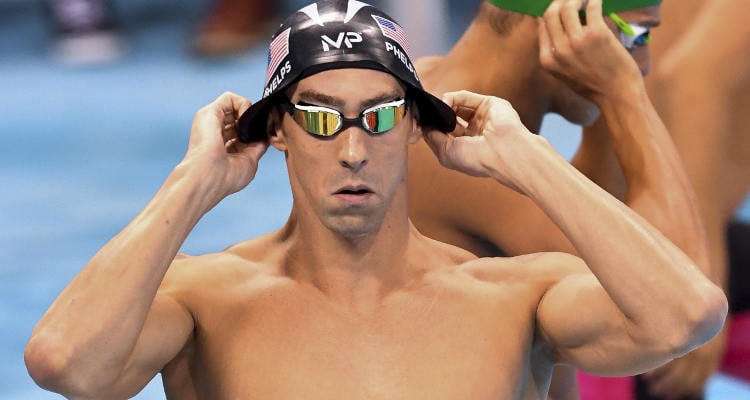 #4 Michael Phelps and his Father are Estranged

Swimming fans have seen Michael’s mother, Debbie Phelps, fiancee, Nicole Johnson and his adorable son, Boomer in the Olympic grandstand, cheering him on several times. But the question is, where is his father, Fred Phelps? Naturally, fans are wondering why Fred Phelps isn’t at the Olympics, screaming his son’s name from the stands as he earns medal after medal.

Unfortunately, Fred and Michael are estranged, and they share a troubled and complicated relationship. At the age of 9, Michael had to stand by and watch his parents get divorced, so understandably, he feels some resentment towards his father. In an interview with Sports Illustrated, Michael stated, “For me, not having a father always there was hard. I had Bob [Bowman], and I had Peter [Carlisle], these guys who acted as father figures. But deep down, inside, it was hard. That was something that was a struggle for me to talk about for a long time, even with friends or my mother. Getting that off my chest in therapy was this huge weight off my shoulders.”

#3 Fred Phelps and Debbie are Divorced

Michael Phelps’ parents, Fred and Debbie were high-school sweethearts who wed in 1973, but got divorced in 1994. Debbie Phelps was a teacher by profession, and was forced to single-handedly raise Michael and his two sisters, Whitney and Hilary. Although Michael and his father were reasonably close after the split, they became distant once Michael’s swimming career started blowing up. In an interview with ESPN magazine, Fred revealed, “I kept trying and trying, but he always had something to do.”

Michael’s mother, Debbie, defended her husband in an interview insisting that, “My ex-husband loved his kids. He loves his kids. It bothered him. But I don’t think he knew how to fix it. So, Michael just kept on escalating and escalating and things were going OK, so he didn’t feel like he needed his dad.”

Debbie Phelps also explained how she managed the single-income household on a teacher’s salary. “We were a team. My two daughters are two years apart, my daughter and Michael are five years apart, and we all relied on each other. I had three kids at three different pools with three different practice times, and then at one point in my life, I just had to go back to college to get my degree. But I like to keep things hopping; it gives you excitement in your life. I’ve got a great group of friends around me, and we all supported each other.”

#2 Fred was Confronted by Michael after his Rehab Stint

31-year-old Michael Phelps was arrested for DUI after leaving a casino in 2014. He went for a voluntary 45-day rehab stint, where he faced his issues of abandonment and avoidance towards his father, Fred. Fred visited his son in rehab, and the two worked out their issues. According to Michael, one of the major problems he had with his father while growing up was due to Fred’s failure to show up for a swimming meet, even after he promised to do so. It was the day Michael set his first short-course record. Another time was at Michael’s first Olympics in Sydney, when Fred brought his new wife along without informing his then 15-year-old son beforehand.

In an interview with SI, Michael confessed, “I felt abandoned. I have an amazing mother and two amazing sisters. But I would like to have a father in my life, and I’ve been carrying that around for 20 years. That’s a long time. It does something to you. To a kid, especially. Right now I’d like to be able to talk to my father and have him be able to talk to me. Is my family perfect? Far from it. My parents had issues where they thought it was healthy to split. It wasn’t ideal. It wasn’t easy. But what we went through as kids made us as strong as we are. And now my father and I communicate. It’s not fixed. You don’t fix something like that. But it’s better.”

#1 Fred Phelps is a Retired Policeman and Former Footballer

65-year-old Fred Phelps is a retired police officer from Maryland. He was on the police force for 28 years and obviously his work hours contributed to his rocky relationship with his son. In 2001, Michael broke a record at a swim meet in Annapolis and refused to hear any excuses when his father couldn’t attend the event because of a shift. Fred Phelps was a high school football player, and had dreams of playing for the NFL one day. He tried out for the Redskins but failed to make the team. Fred currently works in commercial vehicle enforcement training and is married to his third wife.

For more on Michael Phelps and information on his amazing performances at the Olympics thus far, click here!