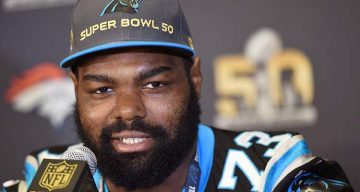 Michael Oher was born into a broken family. Oher was one of the twelve children born to a drug addict mother and a father who spent long periods in prison. He was moved from one foster home to another, and the only way he survived was because he found an escape in football. Things turned around for him when Leigh Anne and Sean Tuohy adopted him and showed him love—they gave wings to his dream of playing in the NFL. Today, Oher is an inspiration to everyone who has been born and raised on the wrong side of the tracks.

Michael Oher’s life is a brilliant example of a person who was born into deprivation. With all the odds stacked against him, Oher still had the courage and determination to fight back and make a productive and important life for himself.

Oher is an American football offensive tackle who is currently a free agent but has excelled in both college football and the National Football League. He has played for teams like the Baltimore Ravens, Tennessee Titans, and the Carolina Panthers.

Oher’s life through his final year of school and the first year of college has been documented in writer Michael Lewis’ 2006 book, The Blind Side: Evolution of a Game, and has been featured in the Academy Award-winning 2009 film, The Blind Side.

If you want to know more about Oher’s struggle, then keep reading for information about Michael Oher’s family and his journey to become an achiever.

Michael Oher was born on May 28, 1986, in Memphis, Tennessee, to his mother, Denise Oher, who was an alcoholic and a crack cocaine addict, while his biological father, Michael Jerome Williams, was often in prison. Oher was one of the 12 children born to his mother, and due to his family situation, he received very little attention and discipline during his childhood. He struggled in academics and attended 11 different schools during the first nine years of his life as a student.

Oher was placed in foster care at the young age of seven. His life became an irregular cycle of living in foster homes and being homeless.

Throughout the entire season, my foundation and I will be taking the field to help improve the quality of life for those…

Oher’s biological father was once a cellmate of Denise Oher’s brother. He was murdered in prison when Oher was still a senior in high school.

Football became an outlet for Oher, and he put all his energy and passion into it. The game became an escape from Michael Oher’s real family.

Shut Out of the Education System

Tony Henderson, an auto mechanic with whom he was living temporarily, suggested to Oher to apply at Briarcrest Christian School. Oher was accepted into the school despite not finishing the required home study program because the headmaster realized that this requirement had taken Oher out of the public education system. During that time, Oher was living with different foster families and lacked any stability in his life.

Then in 2004, a couple named Leigh Anne Tuohy and Sean Tuohy entered Oher’s life. This is when his life began to change for the better.

Leigh Anne and Sean Tuohy had a son and a daughter who were also studying at Briarcrest, and they allowed Oher to live with them. They later adopted Oher, and the Tuohys became the family that he had yearned for and deserved but could not get all these years.

The couple learned about his difficult and unstable childhood and family background and began tending to his emotional and psychological wounds and needs. They hired a tutor for him who worked with him for 20 hours every week to bring Oher up to the required level in his studies and school work.

Oher’s grades improved slowly, and he continued his brilliant run with football to become a star player for his school. Oher received scholarship offers from Tennessee, Alabama, Louisiana State, Auburn, and South Carolina but in the end, he chose to play for the University of Mississippi, the alma mater of his guardians Leigh Anne and Sean Tuohy. It was his way of paying his respects and thanking them for helping him turn his life around.

Certainly Not a Fan

In Michael Oher’s interviews, he has often spoken about how the movie The Blind Side has negatively affected his NFL career.

Oher said “People look at me, and they take things away from me because of a movie. They don’t really see the skills and the kind of player I am. That’s why I get downgraded so much, because of something off the field. This stuff, calling me a bust, people saying if I can play or not…that has nothing to do with football. It’s something else of the field. That’s why I don’t like that movie.”