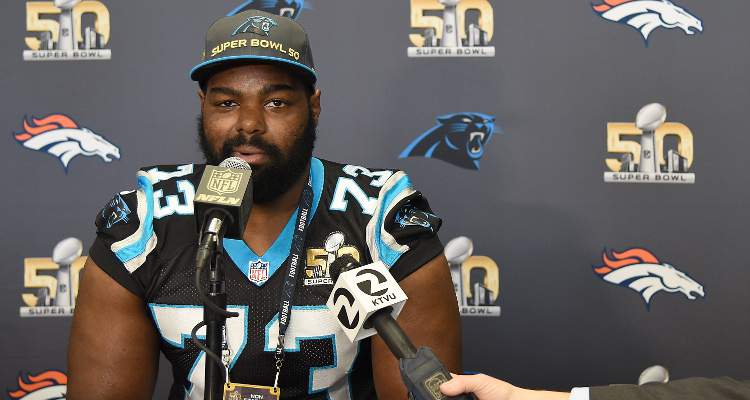 Michael Oher might be one of the greatest players in the NFL, but he claims the movie based on his life hurt his career. His net worth in 2017 is reported at $15.0 million. Did The Blind Side put a dent in that wealth?

Many of us might not have heard about NFL offensive tackle Michael Oher until Sandra Bullock’s award-winning movie, The Blind Side. But the inspiration behind the movie has been suffering from a decline in his performance on the gridiron. His net worth is estimated at $15.0 million, but could it decline? How much does Michael Oher make a year? Here’s a breakdown of the offensive lineman’s wealth in our focus on Michael Oher’s net worth.

From the 2006 book, The Blind Side: Evolution of a Game, and the Oscar-winning movie, we know Oher had spent the better part of his youth homeless and without a family until he was taken in by the Tuohys, who became his foster parents. He went to the University of Mississippi, the Tuohys’ alma mater, and declared himself eligible for the 2009 NFL draft.

He was picked 23rd in the first round of the 2009 draft by the Baltimore Ravens. His first professional contract was worth $13.8 million for five years.

His net worth is now estimated at $15.0 million and his annual salary is around $2.7 million per year.

The following table lists some of his biggest salaries from the NFL alone.

A Bankable Line of Offense

For a very long time, Oher’s sheer offensive abilities have made him a sought-after player. Not only did he build his stats with the Ravens, but he also helped lead the team to Super Bowl XLVII.

After winning his first Super Bowl ring in 2013, Oher signed a $20.0-million contract for four years with Tennessee. But injuries caused him to miss games and he was released in 2015.

But he wasn’t independent for long. The Panthers swooped in and offered him $7.0 million for two years. Though his injuries made him a questionable choice, the team was confident in his abilities. With the Panthers, he played in Super Bowl 50, but lost to the Denver Broncos.

In 2016, Oher signed a three-year contract extension worth $21.6 million with a guaranteed $9.5 million. While the exorbitant price for a player dogged by injuries raised a few eyebrows, analysts believed it was the right choice. He is after all, ranked among the best tackles in the league.

But Oher’s performance continued to be plagued with injuries. He was placed on injured reserve last November with a concussion, having played in only three games during the 2016 season. He spent nine months following concussion protocol and was waiting to be cleared so he get back to play with the Panthers.

Both Oher and the Panthers were concerned about his health and weren’t taking any chances. The 31-year-old had reportedly been healing and tackling controversies in his personal life. Ultimately, he didn’t return to the field and the Panthers decided they needed to fill his empty roster spot. In July of this year, Oher was let go by the Panthers after a failed physical.

The Blind Side, based on the book by Michael Lewis, was a critically acclaimed movie that grossed $300.0 million, won Sandra Bullock an Oscar, and made Oher a household name.

But to the real Oher, the movie proved to be damaging.

After leaving the Ravens, injuries benched Oher for the better part of his later career. Added to it is the criticism about his performance when he does get to play. Since The Blind Side became a blockbuster, he’s claiming that he has faced a barrage of criticism about his game.

“Offensive linemen don’t get looked at,” Oher said in an interview, “Nobody is paying attention to the offensive line. But me? I’m getting watched for everything.”

Since his breakout rookie year, Oher’s stats haven’t been consistent. With the movie bringing him unwanted attention, he feels like he’s been scrutinized even more. Worse still, he’s compared to the Michael Oher they saw Quinton Aaron play on the big screen, and some are disappointed he’s not the same as the character.

“People look at me, and they take things away from me because of a movie. They don’t really see the skills and the kind of player I am,” confessed Oher, “That’s why I get downgraded so much, because of something off the field. This stuff, calling me a bust, people saying if I can play or not…that has nothing to do with football. It’s something else off the field. That’s why I don’t like that movie.”

Though analysts believe his game needs a lot of work, Oher is still an in-demand player within the league. He’s still considered a tackle in his prime and it won’t be long before another team picks him up.

Even though he hasn’t performed incredibly in the last few seasons, his achievements are not something that can be overlooked. From battling homelessness, to jumping between foster homes, and being deprived of family affection before the Tuohys, Oher has made great strides both on and off the gridiron. Thanks to his big earnings, he purchased a home in Brentwood, Tennessee that’s worth an eye-popping $1.3 million; a big achievement for someone who was once homeless.