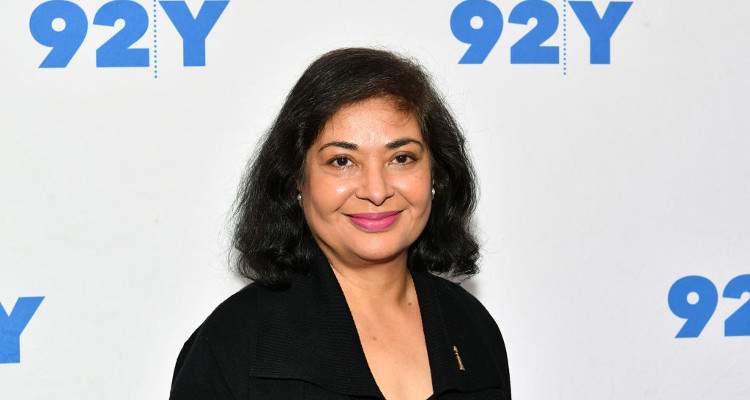 Meher Tatna, the Hollywood Foreign Press Association (HFPA) president, worked as a journalist for several years in Mumbai, India, before making her big move to Hollywood. She is a journalist, actress, and producer who has worked on several films and TV series. Even though she did not wear black for the 75th Golden Globe Awards ceremony for personal reasons, she stands firmly with women and men fighting the scourge of sexual harassment in Hollywood, which has come to light after the Harvey Weinstein scandal. Learn more about this fascinating woman in our Meher Tatna wiki below.

The 75th Golden Globe Awards made a strong statement against the widespread sexual harassment of men and women in Hollywood, as most attendees were dressed in black. However, some of them wore colorful outfits and eschewed the color black for their own reasons. Notable among them was Meher Tatna, the HFPA president, who came to the event wearing a colorful dress that didn’t contain any black!

The HFPA is a non-profit organization of journalists and photographers who cover the entertainment industry and interests in the U.S. The information is used for outlets like newspapers, magazines, books, television, and radio meant for audiences outside the country.

Now, people are curious about Tatna and are wondering why she didn’t wear black when everyone else did.

Meher Tatna explained to ET, “My mom and I planned this a couple of months ago, it is a cultural thing. When you have a celebration, you don’t wear black. So she would be appalled if I were to [have] worn black. And so this is, for my mom. She is watching in Mumbai. Well, maybe not the live show, but she will watch. I love you, Mom.”

However, Tatna supported the Time’s Up movement by wearing the initiative’s black pin created especially for this occasion.

Tatna said, “I do have my Time’s Up button, so [I’m] standing in solidarity with all these other women. The HFPA is 60 percent women; we’ll have our stories. We are also journalists, so anybody who expresses themselves, especially on this topic, we are in solidarity with.”

Also Read: Fox News’ Sandra Smith Wiki: All You Need to Know about the Stunning Reporter!

Working Her Way Up

There is no information on Meher Tatna’s age, but she was born in Mumbai, India, and later moved to the U.S. She earned a degree in economics from Brandeis University and later started working as a journalist.

A member of the HFPA since 2002, Tatna has served as part of its administration for over a decade. She has held various posts in the organization including those of vice president, treasurer, and executive secretary.

Tatna has written for several publications in India, and she currently writes for Singapore’s daily newspaper, The New Paper.

The journalist presided over the 75th Golden Globe Awards ceremony, which was held on January 7, 2018, in Los Angeles, California.

Time for a Big Change

Meher Tatna is also a producer and actress and is known for her work in movies like I’m Losing You, TV series like Miss Match, and video games, including Fallout 4.

It was such an honor to speak alongside Meher Tatna tonight at the #92Y event with the lovely Carla Sosenko. Thank you for having me!

Tatna is passionate about fighting the rising incidence of sexual harassment of women and said, “I think that it’s a change that has come, and maybe it will make a more profound change in the way that our industry does business. I have my own experiences. What woman doesn’t? Not in the entertainment industry, but when I was a waitress. We were all pinched, groped and pulled, and you just had to kind of deal with it and move on. And now I’m glad that people have found their voices and they speak for me as well.”