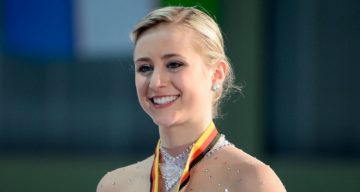 Ashley Cain-Gribble and her skating partner, Timothy LeDuc, suffered an unexpected setback during the 2022 World Figure Skating Championships. Cain-Gribble was taken off the ice on a stretcher after a fall. While her fans and followers are cheering her on, Cain-Gribble had her family by her side. That has also drawn attention to her personal life. LeDuc is often mistaken as Ashley Cain-Gribble’s husband. But the skater’s real other half is Dalton Gribble. Her social media followers have caught glimpses of their relationship that leave them wanting more. We reveal more about the skater’s husband in this Dalton Gribble wiki.

Dalton Gribble was born on November 13, 1994, and hails from Texas. He is one of three children born to Daron and Valerie Gribble.

Dalton grew up in Aledo alongside his brother, Colton Gribble, and sister, Bailey Gribble. Their parents are local business owners there.

Their father, Daron, was diagnosed with melanoma in 2015. The dermatologist removed the affected area on his right cheek and jawline. But months later, doctors found the cancer had spread and he was diagnosed with stage IV metastatic melanoma.

Daron’s wife, Valerie, drove him to Houston every week for regular immunotherapy treatments while Daron kept working the entire time. With prolonged treatment and support from the medical professionals and his family, Daron Gribble is well on the road to recovery.

The Gribbles have more than one athlete in the family. The last name of course brings to mind Cody Gribble, a PGA Tour golfer. Cody, the son of Bill and Diane Gribble, is a cousin of Dalton, Colton, and Bailey.

Dalton and his siblings graduated from Aledo High School. He worked as an equipment operator at TexRock Industries from 2012 to 2014. His mother Valerie was a partner in the same company until 2021.

Ashley Cain and Dalton Gribble’s first date was at a skating rink shortly after Ashley’s run at the 2015 U.S. Championships. They made their relationship work through Ashley’s demanding career, which often took her away on competitions.

After three years together, the couple announced their engagement on March 31, 2018. Amid her packed schedule, the skater shared her wedding preparations with social media followers. Dalton Gribble and Ashley Cain married on June 1, 2019.