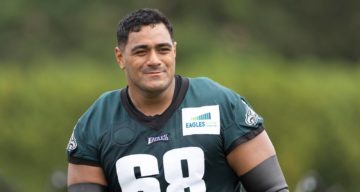 Jordan Mailata #68 of the Philadelphia Eagles looks on during training camp at the NovaCare Complex on July 29, 2021 in Philadelphia, Pennsylvania. (Photo by Mitchell Leff/Getty Images)

Jordan Mailata left everyone watching The Masked Singer in awe with his voice. Now fans want to know more about the rugby player-turned-NFL pro’s life outside the gridiron. Niki Ikahihifo-Bender is the woman known as Jordan Mailata’s girlfriend. The Australian athlete came to the U.S. when the NFL came calling, and the Philadelphia Eagles offensive tackle met his girlfriend there. His social media followers can’t get enough of Mailata and Bender’s relationship. They often ask who Jordan Mailata’s girlfriend is, so we deep dive into her background in this Niki Louise Bender wiki.

Niki Ikahihifo-Bender, who also goes by Niki Louise Bender, was born on December 5, 1991. She hails from Anchorage, Alaska, and is of Tongan descent.

She is the daughter of Talita Ikahihifo and Thomas Bender. Her parents are both doctors who are currently based in Myrtle Beach, South Carolina.

Niki has at least one sister, Jade Ikahihifo-Bender. She is an undergraduate researcher at the University of South Carolina.

Niki Bender attended Mary Baldwin University from 2008 to 2010 and later received her BA in psychology from NYU in 2012.

She later enrolled in Duke University where she pursued her master’s in psychology and her Juris Doctor from 2013 to 2016. She was also part of the Alaska Law Review.

Bender had internships at law firms in Anchorage and was an associate at Norton Rose Fulbright in New York from 2015 to 2018. She’s currently based in Philadelphia and has been an associate at Ballard Spahr LLP since 2019.

Australian-born Jordan Mailata initially played professional rugby in his home country before the Philadelphia Eagles selected him in the 2018 NFL Draft. Not long after, he began a relationship with Niki Ikahihifo-Bender.

Mailata and Bender made their relationship social media official with separate posts on their respective Instagram profiles. Bender even celebrated Mailata making it onto the Eagles roster along with Matt Pryor.