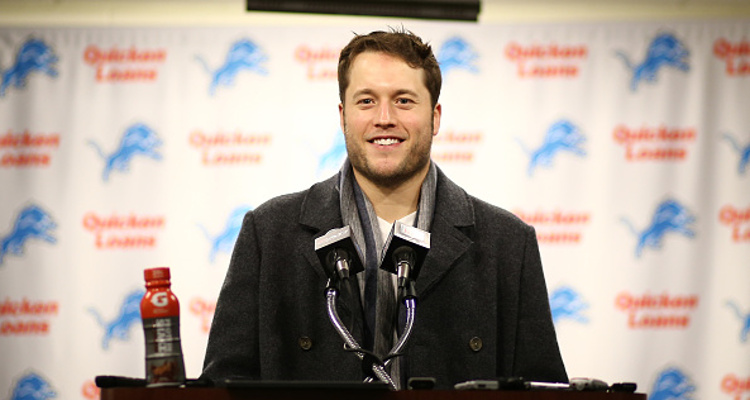 Mathew Stafford is now the highest paid NFL player in history! The Detroit Lions made a deal worth $135.0 million with their new quarterback which includes a five-year extension. This puts Matthew Stafford on top of the record breaking deals list. Stafford’s wife, Kelly Hall, is surely proud of her husband, and we have all the information you need about her right here.

Matthew Stafford ‘s wife, Kelly Hall, gave birth to twins this past March, easily making them one of the most adorable families ever! Kelly Hall’s Instagram posts show off their twins and fans absolutely love them. Matthew Stafford and Kelly Hall got married in 2015 after dating for a good while, and the ceremony was held in Atlanta. Find out more about Kelly Hall right here.

Kelly Hall was born on May 29, 1989, in Georgia, Atlanta and met Matthew Stafford in University of Georgia. Little did the cheerleader know that she would meet the love of her life on the football field. Matthew Stafford was a quarterback for the college football team, and the couple has been together since. Now, she is his biggest cheerleader off the field!

Matthew proposed to Kelly in 2015, and it was confirmed on social media by Kelly’s brother, Chad Hall (also an NFL player). The couple posted pictures of themselves celebrating their engagement at Cold Stone Creamery, with Kelly showing off her colossal engagement ring. They tied the knot on April 4, 2015, in what was described as a lavish ceremony in Kelly’s hometown of Atlanta, Georgia. The wedding was attended by friends and family, along with Matthew’s Detroit Lion’s teammate, Joe Fauria. Each guest received a pair of Nike shoes as party favor and the newlyweds went on a romantic getaway to New Zealand for their honeymoon.

Love how perfectly the cake matched my dress!! Thank you @kat_lushcakery!! #repost @kat_lushcakery with @repostapp. ・・・ Probably one of my favorite pictures of all time. This moment is why I love my job. Thank you @vuephoto for sharing ???? #cakecutting #lushcakery #fullystaffed4415 #foundryatpuritanmill

Matthew Stafford was already on the richest player list for the Detroit Lions. Before his contract was extended this year, he took away an average salary of $17.0 million. But after his latest deal, he now receives an average of a whopping $27.0 million.

Kelly and Matthew tried hard to naturally conceive, but ultimately resorted to IVF. With a good amount of help, they are now blessed with twin girls. Kelly Hall’s kids are Chandler and Sawyer Stafford and the 28-year-old mommy does not have a problem  showing them off on social media. The babies are five months old now, and it looks like Matthew’s raise is more than enough to support his growing family!

It’s always hard to say goodbye when matthew heads to camp. It’s an exciting time because a new season is beginning, but now add these two little ones to the mix and it makes it that much tougher to watch him leave. Cant believe this is going to be season number nine. We will miss you matthew! #season9fornumber9 #newversionoftummytime #chandlerandsawyerstafford #cupcakeandsprinkles

Kelly Hall’s Instagram account (@kbstafford89) has over 100k followers and is dominated by her babies, and of course, Matthew Stafford. But her followers love the twins more than anything else! She makes it look so easy to take care of them and look that good doing it. Though we couldn’t find Kelly’s hot pics, we’re sure you will enjoy these ones:

Guess which one I am!

She is the official cheerleader for the Staffords too!

Hell of win yesterday for the dawgs… And now 7 more days until @detroitlionsnfl kickoff!! #golions #godawgs

Kiss of a lifetime!

It’s been somewhat of a tough year when it comes to everything else besides this marriage. I might be kinda bias, but I think we are pretty good at it! The laughter you bring me everyday is such a blessing and I’m so lucky to have you to lean on. I can’t wait to see what the future holds for us. Cheers to one year with my best friend. #fullystaffed4415