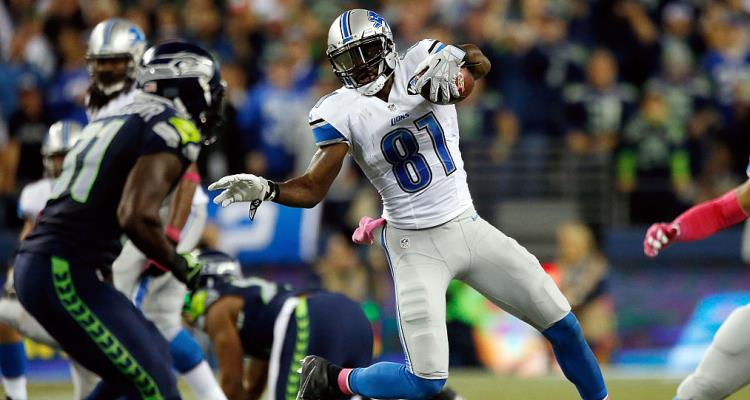 Calvin Johnson Jr. or better known as “Megatron” was announced as one of the celebrity contestants on the Dancing with the Stars cast for Season 23, and he teamed up with professional dancer, Lindsay Arnold. He’s danced over seven types of styles, including the Cha-cha, Foxtrot, Charleston and Argentine Tango. Each week, he performs better than the last—starting off with a score of six from two of the four judges in Week 1, to scoring two nines and two 10’s in Week 7! The star keeps improving and fans are confident he will continue to amaze the judges and audiences. Considering his success as a dancer, fans are searching for information about him such as who is Calvin Johnson Jr.’s wife, what is Calvin Johnson Jr.’s age and how tall is Calvin Johnson Jr.? The answers to these questions and more are right here—so check out our Calvin Johnson Jr. wiki!

Is Calvin Johnson Jr. married? The former Detroit Lions wide receiver married Brittney McNorton in the first weekend of June 2016 in metro Detroit, Michigan. McNorton has been the manager of partnership activation with the Lions since 2012 and she was named their promotion manager in February 2014.

Johnson is a Christian and proudly displays his faith with two tattoos on his arm: an image of the crucifixion of Jesus on his left arm, and a cross on his right. He was also part of a weekly Bible study group with several players from the Detroit Lions. Johnson is currently funding a film called Real Love, which is “a coming-of-age story about a girl trying to stay true to her virginity and her religion.”

According to Celebrity Net Worth, by the time he entered middle school he was already 6 feet tall, and by the 10th grade he reached 6’4! He played high school football as a starting wide receiver for three years, then continued to play in college. He began playing in the NFL in 2007 with the Detroit Lions and his contract is one of the largest extension contracts ever written—8 years for a whopping $132 million! Since he was drafted by the Lions he’s broken records! He has the most receiving yards, receiving touchdowns and 100-yard games (46) through the 2015 season! He has an average of 86.1 receiving yards per game, which is 8.7 yards better than the runner up player, and from 2011 to 2013 he caught 302 passes for 33 touchdowns! His 5,137 receiving yards during that time beat all the other players over a three-year stretch in NFL history! Talk about talent! After nine seasons of incredible sports performance, Johnson retired from the NFL on March 8, 2016. His salary is $22.6 million and Calvin Johnson Jr.’s net worth is $30.0 million. We’d certainly call that a career touchdown!