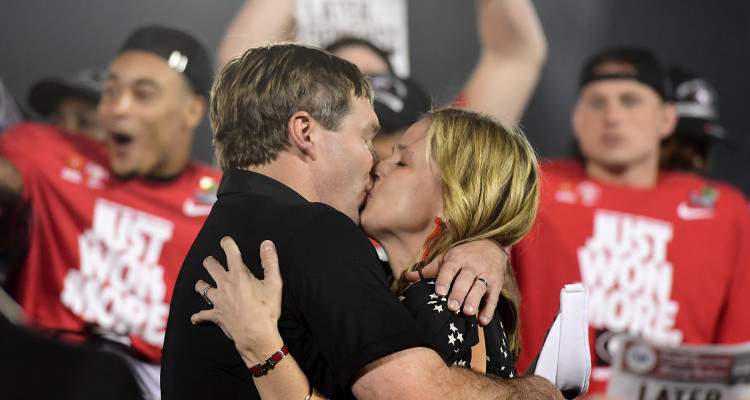 While Kirby Smart is coaching talented youngsters at the University of Georgia to become better football players, his wife Mary Beth Lycett is taking care of the family and home. She was a standout basketball player in school and she now runs marathons, all while proudly standing by her husband’s side.

When Kirby Smart was appointed as head coach of the University of Georgia football team, the person who was the happiest about the news was his wife, Mary Beth Lycett! That’s because she is a Georgia native, and for her, it was a sort of homecoming. Lycett attended Morrow High School in Morrow, about 75 miles from Sanford Stadium in Athens. Her family lives in McDonough, a small town in Henry County. While Smart has a passion for football, Lycett gave herself to basketball and excelled in it, along with being an outstanding student. People are curious to know more about Kirby Smart’s wife, so we have some details from Mary Beth Lycett’s wiki.

Born on August 31, 1981, to Linda and Paul Lycett, Mary Beth Lycett’s age is 36. She was a great basketball player in Morrow and named Class AAAA Player of the Year in 1998, and Class AAA Player of the Year in 1999. Lycett was named Miss Georgia Basketball in her senior season, and went on to attend the University of Georgia where she earned a degree in finance in 2003. She was also a four-year letter winner on the women’s basketball team.

According to the Athens Banner-Herald, Lycett married Smart on July 15, 2006, in Athens, Georgia at the St. James United Methodist Church, with her sister Anne Lycett Toothaker as maid of honor. After a reception in the Athens Country Club, the happy couple flew away for a fantastic honeymoon to the beautiful island of Jamaica. Later, while Smart was coaching for the Miami Dolphins, she taught mathematics at Cooper City High School in Ft. Lauderdale, Florida.

Lycett and Smart have three healthy and beautiful children: Twins Julia and Weston, born on February 8, 2008, as well as Andrew, born on May 25, 2012. Despite having her hands full, Lycett takes time out of her day to do what she loves; running marathons! Talking about her passion for running and participating in a marathon in Chicago, she said, “It was a kind of a bucket-list thing. I mean, I’m glad I did it. It was amazing and awful at the same time. It’s that kind of thing.”

Those who want to see Mary Beth Lycett’s photos might have difficulty finding them online. With no information about Lycett’s Instagram account available, it looks like she is not on social media. Now that she is back in Georgia with her family, she is enjoying being in her home state and is pretty excited about being married to her alma matter’s football head coach. As they say, there’s no place like home!