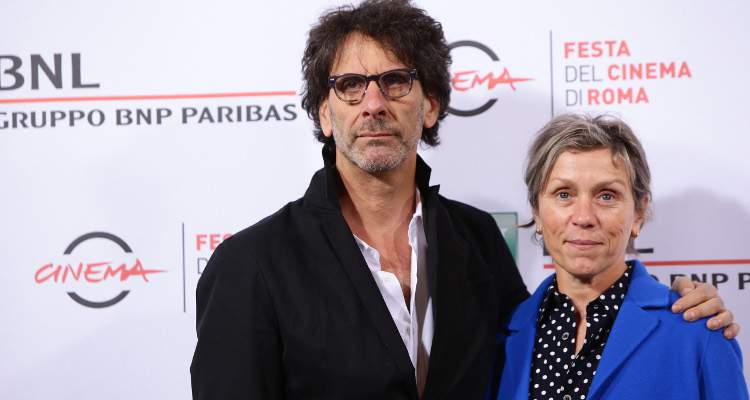 Frances McDormand won Best Actress at the 2018 Golden Globes, and then went on a sassy heavily-censored acceptance speech. We now love her more than Frances McDormand’s husband, Joel Coen can!

Three Billboards Outside Ebbing, Missouri was one of the biggest winners at the 2018 Golden Globe Awards, but Frances McDormand stole the spotlight. The Best Actress winner gave a sassy acceptance speech that was carelessly censored by NBC. It doesn’t take away from her splendid 2017. The same can’t be said about her husband, Joel Coen whose latest movie bombed both critically and commercially. Get the lowdown on Mr. Frances McDormand in Joel Coen’s wiki here.

He’s One Half of the Coen Brothers

Joel and Ethan Coen were born and raised in Minneapolis, Minnesota. Joel is the elder son born to Rena Neumann, an art historian and Edward Coen, an economist at the University of Minnesota.
Despite their parents’ academic backgrounds, Joel and Ethan aspired to work behind the camera. Joel saved up his allowance from mowing the lawn and bought a Vivitar Super 8 camera. They roped in their friend, Mark “Zeimers” Zimering and remade the movies they saw on TV.

While accepting an Oscar for No Country for Old Men, Joel recalled a movie they shot in Minneapolis airport called, Henry Kissinger, Man on the Go. While we don’t know how much of this is true, Joel believes, “What we do now doesn’t feel that much different from what we were doing then.”

After graduating from NYU, he worked as a production assistant on several films and music videos, during which he developed a talent for film editing. During the early days of his career, he met Sam Raimi and edited The Evil Dead, the first of the horror director’s cult franchise.

He Has a Unique Style

The brothers began working on their first screenplay after Joel graduated from NYU. They released their first commercial movie, Blood Simple in 1984 which they wrote, produced, and directed together. The movie follows a sleazy bar owner who plots to kill his wife, portrayed by Frances McDormand.

The movie’s noir horror and dark humor with the mise-en-scène established the Coen’s ironic, thriller, and eccentric, with a splash of dark comedy filmmaking style. The brothers won awards and praise establishing themselves as fresh talent.

They followed it with Raising Arizona, a light-hearted departure from the noir style movie-goers had come to expect from the Coens. After more movies like Miller’s Crossing and Barton Fink, they released their most ambitious movie to date, Fargo in 1996.

The William H. Macy starrer was their darkest comedy and went on to become a critical box office success. It won them their first Oscar for screenplay, and another for Francis McDormand.

63-year-old Joel was often credited as the director of the movies he made with his brother. However, both Joel and Ethan have an equal share in writing, directing, and producing their movies. It wasn’t until The Ladykillers that Ethan got his due credit.

But there’s no animosity between these brothers. In fact, their work is in such tandem, they were once referred to as “The Two-Headed Director.” There are identifiable characteristics in all of their movies.

They focus on round spinning objects for visuals, like the car wheel in The Man Who Wasn’t There. Many movies have a lengthy sequence with less dialogue and a background score as a major event unfolds. There is usually at least one character of an unsympathetic demeanor who is a victim of a past crime.

They’ve got a lot more traits like stereotype characters and vile villains that make their movies an engaging watch. Their critical and commercial success earned the Coen brothers a combined net worth of $120.0 million, leaving $60.0 million each for Joel and Ethan.

He Makes Movies with His Wife

McDormand made her feature film debut with Blood Simple in 1984, the same year she married Joel Coen. The power couple adopted a boy from Paraguay and named him Pedro Coen.

When it comes to casting, Joel is married to his go-to actress. The Coen brothers have a preference in actors and cast them in multiple roles. McDormand’s had several starring, critically-lauded roles in her husband’s movies.

The Two-Headed Directors also frequently cast Steve Buscemi, John Goodman, George Clooney, John Turturro, just to name a few, in multiple movies. In 2017, they released Clooney’s directorial venture, Suburbicon which was critically panned and a commercial failure. McDormand’s performance in a movie that isn’t her husband’s, Three Billboards Outside Ebbing, Missouri, is touted as one of the best movies of 2017.