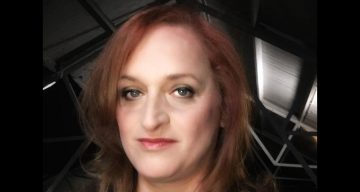 Lynette Nusbacher is an American historian and military expert. Her physical transformation from male to female has inspired thousands of people to proudly embrace their identity. But many are still scratching their heads wondering if they’ve seen Nusbacher before. Previously seen on the History Channel for expertise in military weaponry, Dr. Aryeh Nusbacher and Lynette Nusbacher are, in fact, one and the same. We’ve got all you need to know about the military specialist and her transformation, right here.

Dr. Lynette Nusbacher has been in the eyes of the media since the late ‘90s for being associated with all things strategy and military.

The historian has been researching and working on war, army, and government secret service theories and strategies for over two decades now. And her decision to change herself physically, of course, has nothing to do with her notable expertise in the field. Our Dr. Lynette Nusbacher wiki has all you need to know about this scholar.

Lynette Nusbacher was born Aryeh Judah Schoen Nusbacher on December 17, 1966, in New York City, and was assigned male at birth.

The now-55-year-old went through gender reassignment surgery in 2007. Since then, she’s been known as Lynette Nusbacher.

According to LinkedIn, Nusbacher is highly qualified in war studies and strategy research.

She went to the University of Toronto in Canada, graduating from there in 1988 with a B.A. (Honors) in History and Economics.

Then, in 1994, Nusbacher attended the Royal Military College of Canada and graduated with a Masters of Arts degree in War Studies.

During her studies, she gained in-depth knowledge of intelligence, management, and failures, and the process of armies and mechanized warfare.

It was soon after obtaining her master’s degree that Nusbacher took up a DPhil (Doctorate of Philosophy) at the University of Oxford in British Modern History, earning her the title of “Doctor.”

She has also attended the National School of Government and the Cranfield University-Cranefield School of Management for brief programs in organizational leadership.

Dr. Nusbacher was an administrator at the University of Toronto from 1988 to 1994 before gaining a job as a logistics officer with the Canadian Armed Forces, where she worked until 2000.

She also worked at the Cabinet Office in London, U.K., as the head of the strategy horizons unit, before moving on to lecture at the University of Reading, which is located in Berkshire, U.K.

The military expert was a senior lecturer in war strategies at The Royal Military Academy Sandhurst from 1999 to 2013.
Nusbacher also taught as a visiting lecturer at the University of Reading for Strategy, from 2006 to 2012.