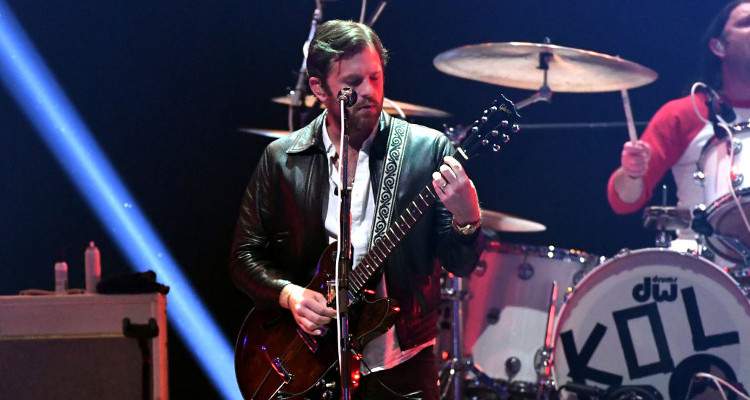 Caleb Followill seems to have it all! He is a member of Kings of Leon, has beautiful supermodel Lily Aldridge for a wife, a pretty baby girl, multiple awards, and a net worth of $16.0 million. Followill had a rough childhood but turned it around with passion, hard work, and determination to make a satisfying and productive life for himself.

When the venue is a catwalk, all eyes are on supermodel Lily Aldridge, but when the venue is an overcrowded rock arena, all eyes are on Lily Aldridge’s husband, Caleb Followill, who sings lead vocals and plays rhythm guitar for Kings of Leon. The band released seven studio albums to date including their latest, WALLS which was released last year. They are known for their hit singles like “The Bucket,” “King of the Rodeo,” “Taper Jean Girl,” “On Call,” “Sex on Fire,” “Use Somebody,” “Notion,” “Wait For Me,” and “Waste a Moment.” The band usually avoids media attention, which is all the more reason why people want to know more about them. Here are some details from Caleb Followill’s wiki.

Born on January 14, 1982, in Memphis, Tennessee, to Betty-Ann and Ivan Followill, Caleb Followill’s age is 35. He has two siblings, Jared and Nathan, and a cousin, Matthew, who help make up Kings of Leon. Ivan was a United Pentecostal Church preacher, and while he held services throughout Oklahoma and the Southern states, Caleb and his brothers would sometimes play drums. They had itinerant childhoods and were mostly home-schooled or educated in small parochial schools.

"Even though I don't play it good, I play it with all my heart" -Caleb Followill on his guitar. #calebfollowill #music #rockcouple #rock #guitar #lilyaldridge #like #love #bestcouple #inspiration @lilyaldridge #model #victoriassecret #kingsofleon #kol #myidol

Their parents divorced in 1997 and Caleb went to live outside Nashville, where he developed a love for country music. He started writing songs and was influenced by bands like Thin Lizzy, the Rolling Stones, and the Clash in particular. The brothers and their cousin got together in 1999 to form Kings of Leon, named after their grandfather. The fledgling band’s music was first heard when they released their EP Holy Roller Novocaine, which generated interest thanks to singles like “Wasted Time,” “California Waiting,” and “Wicker Chair.”

The band went on to release the albums Youth and Young Manhood, Aha Shake Heartbreak, Because of the Times, Only by the Night, Come Around Sundown, and Mechanical Bull before 2016’s WALLS. They were praised for their retro look and potent blend of Southern music and garage rock. Thanks to sales of his band’s albums, singles, videos, and sold-out live shows, Caleb Followill’s net worth is a healthy $16.0 million and growing. He is married to Lily Aldridge, a Victoria’s Secret Angel and one of the most sought-after models today. Lily Aldridge and Caleb Followill’s wedding was on May 12, 2011, at the San Ysidro Ranch in Montecito, California.Caleb Followill’s daughter, Dixie Pearl Followill, was born on June 21, 2012, in Nashville, Tennessee.

The Future of Rock Music

Not much words are needed to say how much I love the person you are! I chose this old, simple picture just to describe the women with the loving, wonderful, nurturing, caring and affectionate smile on her face. A smile that says it all! Happy birthday to my idol ❤❤❤ (Join Lily's birthday campaign as she raises funds to support @worldofchildren programs, because that's how AMAZING she is ) @lilyaldridge #lilyaldridge

The musician loves to share what happens in all aspects of his life with his numerous fans through social media. Caleb Followill’s Instagram account is full of his pictures on stage, stunning snaps of his beautiful wife, playing with his band, his family, and the couple on the red carpet. With a stunning wife who already made a name for herself, a band of brothers, and the security of his wealth, Followill is all set to give fans and critics music that will stimulate their minds and rock their ears.